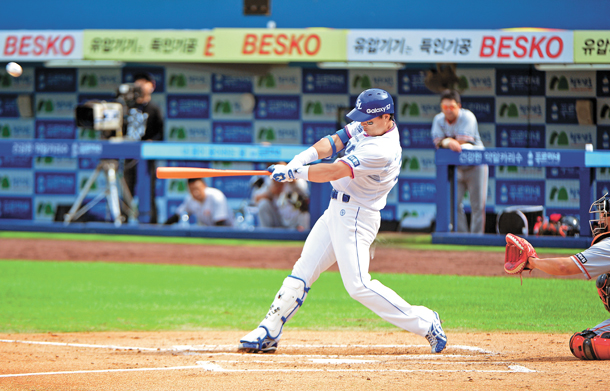 Samsung Lions slugger Lee Seung-yuop made history over the holiday, sending his 600th career home run over the fence on Wednesday against the Hanwha Eagles at the Daegu Samsung Lions Park. [NEWSIS]

Samsung Lions Lee Seung-yuop reached a career milestone over the Chuseok holiday, hitting his 600th professional home run on Wednesday against the Hanwha Eagles. Now that he’s finally accomplished the historic feat, the “Lion King” hopes to enjoy the rest of a bright career that’s soon coming to its end.

The Lions’ designated hitter rounded the base silently with his head down after hitting a home run on Wednesday. Another day, another home run for the most celebrated slugger in the history of the Korea Baseball Organization (KBO) it seemed, except the scoreboard behind him displaying the number ‘600’ and the fans going wild at Daegu Samsung Lions Park clearly suggested this was no ordinary long hit. It was Lee’s 441st dinger in the KBO, and added to the 159 he cranked out during the eight years in the Nippon Professional Baseball (NPB) in Japan, Lee had finally belted out the 600th homer of his career.

The homer was significant, not just in the Korea Baseball Organization, but also in the history of the game itself. Not only did Lee become an all-timer record holder of the KBO in two slugging categories with 441 home runs and 1,402 runs batted in (RBI) after the homer, but he is now the 11th player in the world to go beyond the 600-mark. The list includes baseball Hall of Famers and legends such as Babe Ruth, Barry Bonds of the United States and Sadaharu Oh of Japan. What an honor it is for Lee, as well as for the KBO, to have a Korean name among the list.

“Personally, I was not that concerned [about the record] but I knew it was the talk of the town among the fans and the media,” Lee said when asked how it felt to finally set the record fans had been waiting for. “I felt I needed to get it over with for the sake of the team. Now that I have set the record, I feel relieved.”

Lee added, “I came out early and practiced my swing. It felt different. I knew I was going to take a crack at it and it felt good to swing that bat.”

Lee, a devoted Lions man who’s spent 14 seasons in the KBO only with his Daegu-based team, is quite the celebrity in his hometown. Indeed, the walkway to the Lions ballpark is named “Road of the Legend,” commemorating Lee’s contribution to the team.

Lee joined the Lions in 1995 as a pitcher after graduating from Kyeongbuk High School in Daegu, but soon became an infielder. Since then, Lee enjoyed a successful career as a slugger, playing in 121 games in his rookie season, batting .285 with 13 homes runs and 73 RBIs. The five-time KBO League MVP saw his career in the domestic league culminate in 2002, just two seasons before he left Korea, batting .323 while sending 47 balls over the fence and tallying 126 RBIs. Lee also grabbed his first Korean Series title that year.

Lee then spent almost a decade in the NPB, moving around while playing for teams such as Chiba Lotte Marines, Yomiuri Giants and Orix Buffaloes. He won two Japan Series championships during his eight-year stint in Japan in 2005 and 2009 while batting .257 with 159 homers and 439 RBIs. The Slugger, however, was never scooped up by a Major League club. The closest he came was in 2008, but the negotiation with the Los Angeles Dodgers was eventually aborted.

Nevermind what he could have accomplished had he not left the KBO, Lee said the past is in the past. “I thought about it,” he said. “But that’s only hypothetical.”

But Lee’s decorated career is coming to an inevitable end. Over 40 now, Lee says he has about a year left in his barrel before he takes off the helmet for good. “I came here and gave everything I have,” Lee commented. “I want to take it easy now and I think my role on the team will be less significant, as it should be. The rest before I retire is a bonus round for me. I want to enjoy it. But I do hope kids remember me as a player who did his best even until the end.”