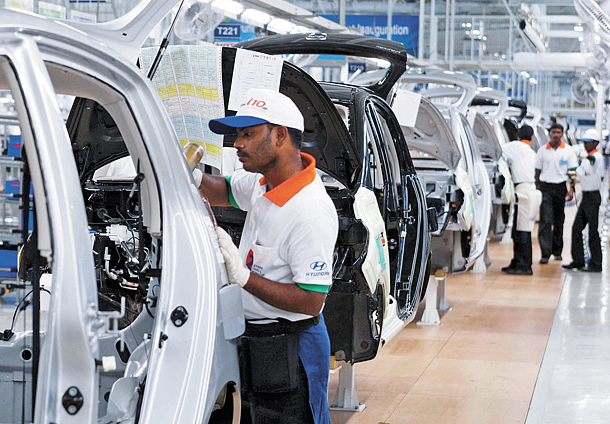 A worker puts together auto parts for Hyundai Motor’s localized vehicle i10 in a factory located in Chennai, India. Hyundai Motor Group has been continuously expanding overseas manufacturing because of high labor fees and strict regulations in Korea. Hyundai Motor’s manufacturing rate abroad in the first half of this year was 64 percent, and for its affiliate Kia Motors, it was 45.8 percent. [hyundai motor]

A former CEO surnamed Kim recently closed down his factory that supplied electronic parts to automakers. His company used to make 400 billion won ($360 million) a year, but with the number of cars being made in Korea rapidly shrinking, he was left with no choice but to shut down his plant.

“I could have run the business for a few more years,” Kim said. “But I thought it would be better to close it down before I lose more money.”

Kim’s case is representative of many small and midsize suppliers in Korea’s manufacturing industry that have fallen victim to conglomerates relocating production to foreign countries, mostly less-developed places where labor is cheaper, to raise cost effectiveness.

This phenomenon known as offshoring began in Korea in the early 2000s and gained momentum by the end of the decade.

The rapidly increasing number of large factories leaving Korea has consequently led many small and midsize suppliers to follow suit and move abroad as well, closing down their Korean operations.

But even when they move abroad, success is not guaranteed. In April, one company that used to manufacture circuit boards for cell phones delisted from the Korean market. It used to gross 500 billion won per year, but after a failed investment in Vietnam followed by a string of unsuccessful business ventures on top of allegations of embezzlement within the management board, the company collapsed in a split second.

“Advancing overseas too hastily was the main cause behind their failure,” insiders said.

According to the Korea Institute for Industrial Economics and Trade, auto parts suppliers not directly affiliated with car manufacturers saw their revenue fall by 11.7 percent last year.

“It is either that they couldn’t advance to other countries when their contracted car companies moved out of Korea, or they managed to move abroad but couldn’t generate enough revenue due to declining demand for their parts,” said Lee Hang-ku, a senior researcher at the institute.

Big manufacturers, especially automakers, instead have been increasing their demand for cheaper parts made abroad. According to the Export-Import Bank of Korea, components made in Korea and shipped to foreign branches used to enjoy an average year-on-year growth rate of 44.5 percent.

By 2014, that rate had shrunk significantly to 0.6 percent, meaning companies with factories abroad decided to opt for locally-made parts instead of ordering from plants based in Korea.

Companies argue that high labor cost and the strong influence of labor unions are what’s mainly driving them overseas in search of cheaper and more productive workforce.

Korean workers at Hyundai Motor in 2014, for example, made an average 96 million won per year, much higher than the 78 million won annual salary of those working at the automaker’s Alabama plant in the United States.

And higher wages do not always necessarily translate to higher productivity. It takes an average 26.8 hours to manufacture one vehicle in Korean factories while the Alabama factory can make one in 14.7 hours.

On top of that, Hyundai Motor is often at odds with its labor union in Korea, resulting in wage negotiations happening every year. This year, no deal has yet been reached, and continuous walkouts by the union have cost the company an estimated 1.5 trillion won in loss so far.

Heavy regulations on Korean companies are also making it harder for them to run factories here.

“Korea imposes ineffective policies on big companies in Korea, and there are so many unnecessary restrictions as well,” said Lee Ji-sun, a senior researcher at LG Economic Research Institute. “The central and provincial governments have to cooperate in order to lift some of the regulations that are not needed.”

To stem the exodus of Korean manufacturers, the government established a law in 2013 to support their return.

However, only 80 small and midsize companies have restored their facilities here, compared to some 700 companies that returned to the United States five years after it passed similar legislation.

Making matters worse, the number of companies coming back is gradually shrinking. In 2014, 16 companies returned after getting support from the legislation. The next year, only nine companies came back, and in the first half of this year, the number shrank to four.

LG Electronics was the only Korean conglomerate that agreed to return, moving a portion of its Mexico-based factory dedicated to making washing machines back to Korea. In June, the electronics company expanded its plant in Changwon, South Gyeongsang.

Hyundai Motor Group, the nation’s top automaker, has refused to expand their Korean factories. The southern city of Gwangju, which has been working on an industrial complex dedicated to eco-friendly vehicles, has been trying to woo the company to be part of the project.

However, Hyundai Motor Group has maintained a tepid response, saying expansion of domestic facilities would deteriorate productivity while increasing cost.

“It is true that the number of companies benefiting from the legislation and coming to Korea has dwindled recently,” said an official at the Ministry of Trade, Industry and Energy. “But more time is needed to see whether the law is actually effective or not. We have actually started seeing some cases where their financial state improved after coming back to Korea.”

Offshoring continues to diminish the contribution of manufacturing to Korea’s economy.

According to Hyundai Research Institute, the Korean manufacturing industry during its heyday in the 1970s had a growth rate of 18 percent, but it has been shrinking nonstop ever since, hitting an average drop of 5 percent in the past five years.

During the same period, the industry’s contribution to the economy fell from 3.5 percent to 1.4 percent.

The speed at which companies are leaving the country is also unusually high.

According to LG Economic Research Institute, it took Japan 10 years to experience a 10 percentage point increase in the portion of their manufacturing companies going overseas in the 1990s. However, it only took six years for Korea to experience the same rise in the mid-2000s.

Experts believe offshoring has had a particularly negative effect on Korea because of small and midsize suppliers’ high dependency on big companies. For some small suppliers that rely heavily on contracts with one or two conglomerates, there is no way for them to survive once their main contracted companies move production overseas.

And even if the suppliers follow conglomerates abroad, some parts makers fail to survive, ousted by local companies that offer lower wages.

In fact, the revenue of Korean auto parts makers in 2015 dropped by 5 trillion won compared to the previous year.

In the electronics industry, five parts suppliers were ranked in the risky tier two years in a row in a credit assessment released by the Financial Supervisory Service last month.

“Just because Samsung Electronics is a top-notch conglomerate, we shouldn’t hastily conclude that Korea’s electronics business has a corresponding competitiveness as a whole,” said researcher Lee of the Korea Institute for Industrial Economics and Trade.

Even as conglomerates continue to move their manufacturing operations abroad, some production is staying at home.

“We manufacture premium products at plants in Korea,” said a Samsung Electronics spokesperson. “The unit price is twice as much as the ordinary one, so even if productivity in Korea is reduced in terms of quantity, it will have a minimal effect on Korea’s economy.”

LG Electronics’ factory in Changwon accounts for a third of their global production of home appliances.

“We manufacture parts for premium home appliances in domestic factories because of the workforce’s maturity and know-how,” a company spokesman said.