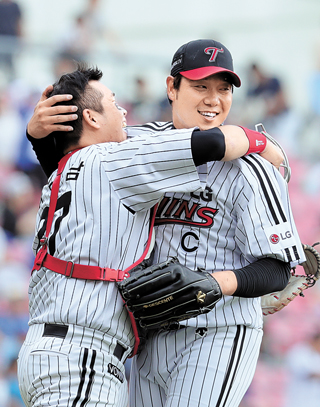 Ryu Jae-kuk, right, of the LG Twins celebrates with catcher Yoo Kang-nam after grabbing a shut-out win over the Samsung Lions on Sunday at Jamsil Stadium in Seoul. After the Chuseok holiday, the Twins are ranked fourth in the league. [YANG GWANG-SAM]

No fan of the LG Twins could have asked for a better way to end the Chuseok holiday than with Ryu Jae-kuk’s shut out win on Sunday.

The main spectacle of the week during the Chuseok holiday in Korean professional baseball was indeed the Twins. In the six games they played over the week, the Twins captured five victories with only one loss, recording a winning rate of 80 percent for two straight weeks. Never mind the prevalent doubts regarding the Twins’ prospect to play in the postseason, their run over the holiday week essentially paved the way for them to play a little more ball in the coming fall.

One of the highlights of the week came during the series against the Kia Tigers from Thursday to Friday. The Tigers, rivals of the Twins at the moment as they aim for a spot in the postseason, had their ace pitcher Yang Hyeon-jong as the starter on Thursday. But against the southpaw, the Twins infielder Oh Ji-hwan cranked a double at the bottom of the six when bases were loaded while the Twins were trailing 1-2. This clutch hit flipped things around for the Twins by driving in two runners home to make the score 3-2 and put the Twins in the lead. The next day, the Twins starting pitcher Woo Kyu-min pitched for six innings while giving out only one run to lead the Twins 3-1 over the Tigers.

The Twins’ run, however, was yet to hit its peak. On Saturday and Sunday against the Samsung Lions, the crowd in Jamsil Stadium watched in awe as the Twins claimed two wins, both as dramatic as any.

On Saturday, the Twins were trailing by 2-0 up until the eighth inning. Fans may have imagined the Twins were out of gas after the previous games, but just as then Luis Jimenez came out with a single to bring a runner home. Two plays later, Park Yong-taik drove home to even out the score after Oh earned a base on a ball. The match went into an extra inning.

The game was deadlocked during the extra inning and eventually went all the way to the 11th inning. As dramatic as the game had been, however, it would take another climactic play to end the stalemate. This was when Lee Chun-woong, a 27-year-old outfielder, came in to save the day for the Twins. Lee belted out the second pitch tossed by the Lions reliever Jang Won-sam to the right fence for a walk-off homer to conclude the game and take the win.

The Twins continued their momentum the next day. On Sunday, it was the starting pitcher Ryu who came under the limelight. Ryu pitched the entire game, tossing 122 balls while grabbing five strikeouts and conceding five hits to shut down the Lions. While Ryu dominated the game on the mound, Oh and outfielder Moon Seon-jae held the batting lineup together slapping runs on the board. While Moon went 2-for-4 with one run, one homer and two runs batted in, Oh went 2-for-3. At the end of the day, the Twins routed the Lions 5-0 to claim its fourth straight win.

The Twins and the Tigers had been neck-and-neck in the Korea Baseball Organization rankings, especially recently. Before the week started the Twins and the Tigers were tied at fifth after the SK Wyverns. But with the Wyverns falling in an eight-game skid, the two rose to the fourth in the standings. Finally, by claiming two straight wins over the Tigers, the Twins became the sole fourth-place team while the Tigers went down to the fifth. As of Monday, the Twins have the upper hand, ahead of the Tigers by three games.

Of course, taking the high ground for now doesn’t mean the end of business. The Twins still have a couple of weeks in the bag before the list for the postseason is finalized. Yang Sang-moon, the Twins’ manager, will have to wait a little longer before he can start grinning.