T.O.P curates fine visual menu for Sotheby’s: His taste in art draws from old and new, East and West

T.O.P curates fine visual menu for Sotheby’s: His taste in art draws from old and new, East and West 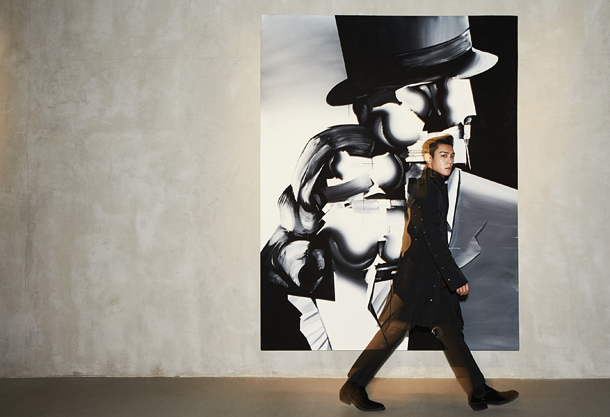 Choi Seung-hyun, better known as T.O.P, passes in front of Gotika Tomoo’s 1969 painting “Divorce,” which is one of the 28 pieces of works to be sold at the Sotheby’s Hong Kong auction on Oct. 3, which the Big Bang member has guest-curated. [HONG JANG-HYUN]

As a young art collector rather than as a pop icon, Korean star Choi Seung-hyun, better known as T.O.P, a member of the band Big Bang, has guest-curated Sotheby’s evening auction of Western and Asian contemporary art to take place in Hong Kong on Oct. 3.

A collaboration between the fine art world and a young pop idol may arouse skepticism but Patti Wong, chairman of Sotheby’s Asia, confirmed her trust in T.O.P’s insight in contemporary art on Monday, saying that the London-based auction house works with him “not because he is a pop artist but because he is a collector.”

“Today, collectors’ tastes are going toward that of young-aged ones, who, by actively getting information through social media and the internet, have a wider taste than earlier collectors who focused on narrower fields or genres of art,” she said. “T.O.P is at the forefront of the new trend.”

She added that co-curating with a pop star has never been done before at Sotheby’s auctions. She was in a press preview of the 28 pieces of works selected by the star for the auction titled “#TTTOP” at the Shilla Seoul hotel.

The works, which are estimated to be worth about 90 million Hong Kong dollars ($11.5 million) are the products of big names such as Andy Warhol, George Condo and Rudolf Stingel. A rare series by Keith Haring from the collection of the renowned photographer David LaChapelle is also being offered. Works by Korea’s most important artists, such as abstract painter Kim Whanki and video art founder Nam June Paik, are also included.

In the press preview, the 28-year-old T.O.P, wowed reporters by showing integrity and knowledge about art. Here are excerpts from the preview and his exclusive e-mail interview with the Korea JoongAng Daily before it.

Japanese artist Kohei Nawa’s “Pixel - T.O.P - Doom Dada,” left, and Rudolf Stingel’s “Untitled”(1956) are part of the works to be put up for the “TTTOP” auction. Right: T.O.P stands besides Kim Whanki’s painting at the Shilla Seoul on Monday. [SOTHEBY’S , MOON SO-YOUNG]

Q. Among your selections are dansaekhwa [or Korean monochrome abstract paintings that developed in the 1960s to 80s.] It is interesting because you are a young collector, while dansaekhwa tend to be favored by elder, veteran collectors.

A. I like the meditative air in those Korean art pieces. I prefer two groups of art - one are the artworks that are visually strong and eye-catching and the other are those that are visually minimalist but have novel concepts or deep philosophies. I was able to have my eyes opened to the latter early on, thanks to my family background. All my mother’s sisters are artists. And my [maternal] grandfather’s uncle is Kim Whanki. So I naturally came to learn the beauty and philosophy of Korean [modern] art works.

For this auction, I mixed them with those by Western masters such as Gerhard Richter and Jean-Michel Basquiat, as I‘d like to show a new harmony generated by them. I deliberated a lot on how this auction should be composed. It took more than a year.

And what’s your standard in collecting art for yourself or recommending art for other collectors?

I consider first the novelty, scale and depth of concept in an art piece and then the scale of beauty.

Do you think your participation in this auction could influence young collectors?

I hope so. I hope young people will recognize that visual art, like music, is not so difficult to understand. In the diary of Kim Whanki that I read when I was young, he said every master’s painting has music in it and he was looking for his own song, his own music in his paintings. I was greatly impressed by his words. I, as a musician and actor, get inspiration and clues from visual art. I think other young people, not only those in fields of music and film, can be inspired by visual art.

Meanwhile, this auction will also support emerging artists, as a portion of the sales’ proceedings will be donated to the Asian Cultural Council (ACC). When I asked the famous artist Takashi Murakami for a commissioned work for this auction, he gladly accepted it, saying that he was also helped by the council’s program.