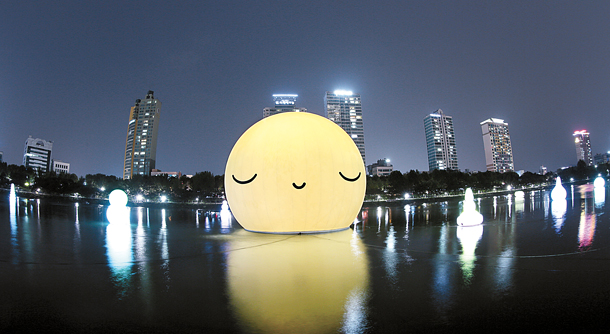 The “Super Moon” art installation on Seokchon Lake appears in gold. The lighting was changed from white to gold Wednesday to Saturday to celebrate Chuseok. [LOTTE CORPORATION]

Lotte World Mall saw a boost in visitors during the Chuseok holiday weekend, thanks to its art installation “Super Moon,” which has been floating on nearby Seokchon Lake since Sept. 1.

“Our guess is that mall visitors increased as more people came to see the nearby ‘Super Moon’ during the long holiday season,” a Lotte Corporation spokesman said.

“Super Moon” is the third public art installation project jointly organized by Lotte Corporation and the Songpa District Office. Their first project, “Rubber Duck” in 2014, featured a giant rubber duck on Seokchon Lake, and the second was “1600 Panda+” in 2015, in which 1,600 panda sculptures were installed at Dongdaemun Design Plaza in central Seoul. 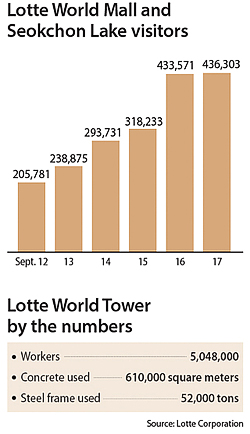 FriendsWithYou, a public art group based in the United States, devised the vinyl artwork inspired by the full moon, a symbol of Chuseok.

Whereas it took 10 days for 2014’s “Rubber Duck” to bring in a million visitors, it took “Super Moon” just a week. Up until Saturday, the installation had 3.2 million visitors. For Chuseok, “Super Moon” beamed in gold from Wednesday to Saturday to celebrate the holiday.

Park Ju-hee, 37, visited Songpa District to shop at Lotte World Mall and see “Super Moon” on the last day of the “Golden Moon” event. “I had a good time taking pictures and making wishes to the ‘Super Moon,’” she said. A total of 280,000 people visited the lake that day.

Lotte Corporation hopes the rise in visitors will lead to the success of the Lotte World Tower, which is scheduled for completion by the end of this year.

In its sixth year of construction, the project is setting records in terms of the amount of workers, concrete and steel frames used. It is estimated to have raised Korea’s construction capacity to a new level because cutting-edge skyscraper techniques had to be acquired and used to build the tower, which is the tallest building in the country.

Lotte’s expectations are that the completed tower will double the number of visitors who come to Lotte World Mall by increasing the “floating population” and tourists in the neighborhood.

Some say that the economic effect of the tower may reach 10 trillion won ($9 billion) considering its possible impact on the local market area and rise in real estate value.

“We are already seeing positive effects from not only construction, but also job creation and increased floating population,” said Park Hyun-chul, senior managing director at Lotte Corporation. “After its completion this year, our plan is to make the tower a commercial and cultural mecca.”