Korea on alert after Fed meeting

Korea on alert after Fed meeting 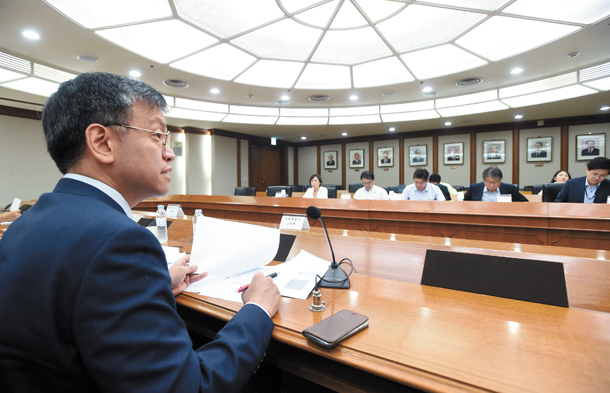 Choi Sang-mok, vice minister of strategy and finance, speaks during a meeting on Thursday at the office of the Export-Import Bank of Korea in Yeouido, western Seoul. [NEWSIS]

The government held an economic policy meeting on Thursday to discuss various measures to reduce the negative impacts from a possible U.S. Federal Reserve rate hike, after the Federal Open Market Committee met the previous day and decided to freeze rates for now but hinted at a possible hike later this year.

During the policy meeting with representatives from the Ministry of Strategy and Finance, Bank of Korea, Financial Services Commission and Financial Supervisory Service, Choi Sang-mok, the first vice minister of strategy and finance, said the government would monitor issues such as rising household debt and an overheated real estate market to remain prepared for a rate hike.

Even though household debt is growing at a slower rate compared to the past, the government warned that it still has to look into the issue closely as loans taken out from smaller financial institutions, which tend to have higher interest rates, continue to rise.

In the first half of this year, household debt from mortgage loans rose 23.6 trillion won ($21.4 billion) from the same period last year. The figure is 9.1 trillion won lower than the 32.7 trillion won increase experienced last year.

After the U.S. Fed decision to freeze rates, all eyes are now on the Bank of Korea and whether it will continue to lower its key rate.

In June, the central bank lowered the rate from 1.5 percent to an all-time low of 1.25 percent, and many observers expect it to lower the rate again as early as next month in hopes of boosting the local economy.

However, many financial institutions, including Hana Financial Investment, which argued that the bank would lower the rate next month, now believe the central bank is likely to freeze the rate for at least this year due to the high household debt.

The Bank of Korea will meet to discuss the nation’s interest rate on Oct. 13 and will announce its plans then.

Meanwhile, the U.S. Fed decision to freeze rates did not have much negative impact on the local stock market. The benchmark Kospi rose 0.67 percent from the previous trading day to close at 2,049.70, and the secondary Kosdaq rose 1.03 percent to 685.24.

“The U.S. Fed has hinted at an interest rate hike later this year, but it also said it would raise it gradually, [which means more time to be prepared]” said Yoon Chang-yong, a researcher at Shinhan Investment.