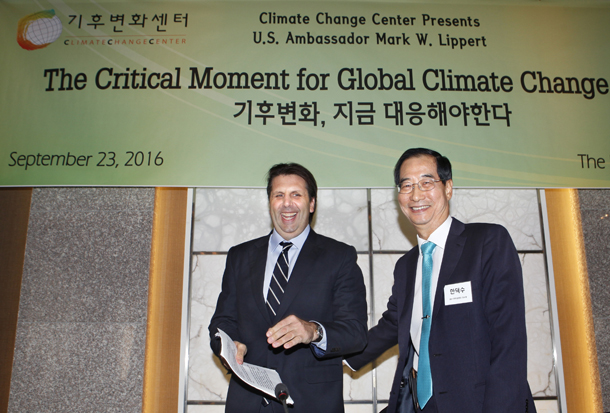 U.S. Ambassador to Korea Mark Lippert, left, and Climate Change Center Chairman and former Prime Minister Han Duck-soo emphasized the importance of continued U.S.-Korea cooperation to curb climate change in line with international efforts like the Paris Agreement at a forum on Friday co-hosted by the U.S. Embassy to Korea and the Climate Change Center. [PARK SANG-MOON]

“We applaud President Park’s consistent support for early ratification of the Paris Agreement and the Republic of Korea’s leadership on the global effort to combat climate change,” Lippert said, “and are very supportive of the fact that it has been quickly sent to the National Assembly for debate and consideration.”

Addressing a crowd of some 60 people, including members of the Climate Change Leadership Academy of the Climate Change Center, which hosted the event with the U.S. Embassy to Korea on Friday, the ambassador urged the international community to take part in efforts against the “catastrophic global impact” of climate change.

“We are at a crucial time as we near the threshold for bringing the Paris Agreement into force,” the ambassador said.

That brings the number of countries that have signed the global agreement to tackle climate change to 60, which puts it one step closer to coming into force before the end of the year.

“Anyone can do the math, we are now very close,” Lippert said. “Countries that have not yet ratified it can play a critical role in reaching this milestone.”