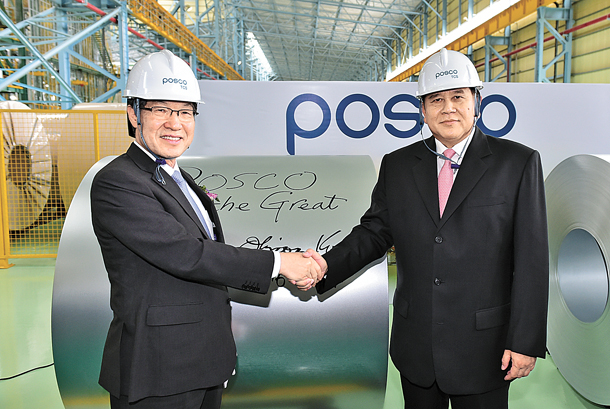 Posco has plans to overcome the difficulties the heavy industry market is facing from oversupply, industry recession and the reinforcement of import and export regulations.

In the second half of this year, the company will continue to carry out structural adjustments on its subsidiaries and non-core assets, cut down operational costs and expand its sales of its high-profit World Premium (WP) products.

WP products maintain a business profit rate of 15 to 20 percent, and are the number one contributor in improving the profit ability of Posco. WP products include the ultra high-strength steel sheet, which recently became popular in the automobile industry due to its enhanced durability and lightness.

A total of $300 million was invested to construct the new Continuous Galvanizing Line (CGL) factory in Thailand. Posco is seeking to target Thailand’s automotive steel market by supplying products manufactured in the factory and processed in POSCO-TBPC, a steel processing center also located in Thailand, to car and auto parts companies such as Toyota, Nissan and Ford.

As a result of the construction of the CGL factory, Posco’s production capability of automotive steel sheets for overseas vehicles increased to 2.25 million tons a year.