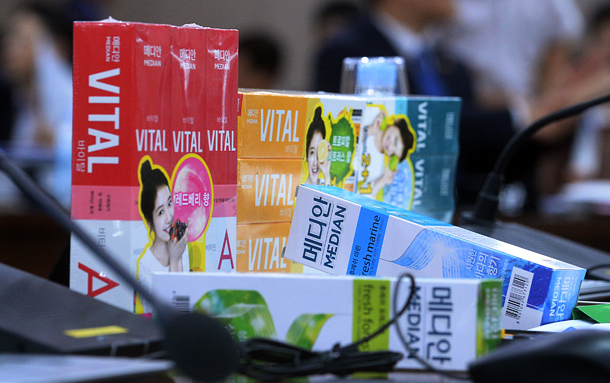 Eleven AmorePacific toothpaste products, including the widely consumed Median, were found to contain the same toxic chemical as Oxy Reckitt Benckiser’s humidifier sterilizers, which claimed the lives of over 100 people earlier this year. The cosmetics company said Tuesday that it would roll out a comprehensive recall process starting today. [NEWSIS]

AmorePacific, the country’s leading cosmetics company, said Tuesday that it would recall 11 of its toothpaste products found to contain the same toxic chemicals used in Oxy’s humidifier sterilizers that caused the deaths of over 100 Koreans earlier this year.

The product line in question includes popular toothpaste brands such as Median and Songyeom.

“We sincerely apologize for causing safety problems with our products,” AmorePacific said in a statement issued under the name of Shim Sang-bae, the company president, Tuesday evening.

“The company recently found out that the ingredient supplied from the raw materials company contained sodium dodecyl sulfate, which has a micro amount of CMIT and MIT chemicals,” the cosmetics maker said, adding that it should have checked all ingredients more thoroughly.

The amount of toxic chemicals range from 0.0022 to 0.0044 parts per million, an amount considered by the ministry as “not harmful to the human body, especially after washing the mouth with water afterward.”

“Although the two chemicals are completely prohibited from domestic products, they can be used freely in American toothpastes,” a Korean ministry official said. “European nations set the limit to 15 parts per million, and even this is a standard that is not harmful to the human body even if all the residue is absorbed by the body.”

AmorePacific said it would recall all 11 products starting today regardless of when, where or how customers purchased them, adding that the exchange and refund process would be available even for customers with no receipt.

Toxic chemicals in consumer goods have become a highly sensitive issue in Korea ever since British manufacturer Oxy Reckitt Benckiser’s humidifier sterilizers were found to have claimed the lives of over 100 people earlier this year.

Most recently, domestic wet tissue maker Taekwang recalled its products early this month because they contained the same toxic chemicals.