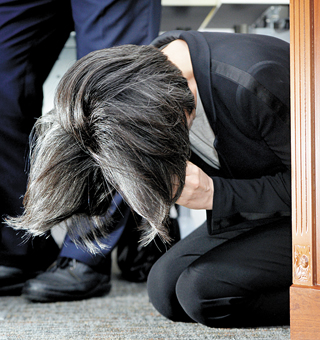 Choi Eun-young, former chairwoman of Hanjin Shipping, refused at a parliamentary hearing late Tuesday to cough up additional funds from her personal assets to help save the world’s seventh-largest container carrier.

On Sept. 12, Choi vowed to provide 10 billion won ($9.1 million) in private funds to cash-strapped Hanjin help tide the company over during the ongoing crisis. She knelt in front of lawmakers at the hearing at the Sejong Government Complex Tuesday, when Park Wan-joo, a lawmaker with the opposition Minjoo Party, berated her.

“You dragged up Hanjin Shipping’s debt ratio from 155 percent to 1,445 percent during your term and now you are saying you cannot donate your own assets because [Hanjin Group] Chairman Cho Yang-ho has been in charge since 2014?” Park asked. “Do you think you have served your responsibility? You are supposed to be sincere when making apologies.”

“I am sorry if I appear I am not properly apologizing. I apologize from the bottom of my heart,” she said, falling to her knees and sobbing with her head down for half a minute. “But [coughing up more of my fortune] would be difficult because it may wreak havoc with the management of Eusu Holdings.”

She currently is chairwoman of Eusu Holdings, which was split when she gave up oversight of Hanjin Shipping in May 2014.

Choi, 54, who took over control of Hanjin from her deceased husband and then-chairman in 2007, was seen crying at a different hearing on Sept. 9. Her action only stirred cynics who said she was shedding crocodile tears.

Her assets are estimated at up to 40 billion won and could be as large as 180 billion won if her late husband’s hidden fortune is taken into account. She insists the 10 billion won she is coughing up amounts to a third of her assets.