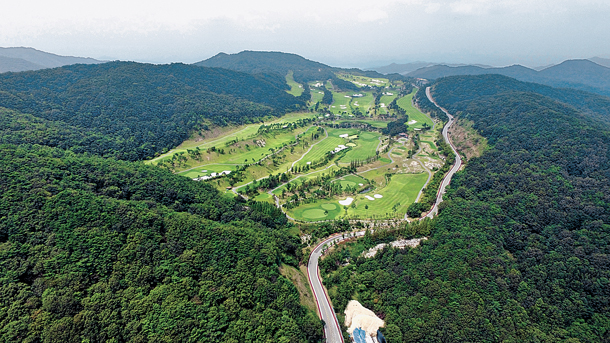 A bird’s eye view of the Lotte Skyhill Seongju Country Club, which was chosen for the new site of the Terminal High Altitude Area Defense system. [GONG JEONG-SIK]

A country club in the rural southern town of Seongju, North Gyeongsang, was selected as the new site of the U.S. military’s controversial antimissile system, the Ministry of National Defense said Friday, informing concerned local governments.

In July, Seoul and Washington announced the decision to deploy the system in Seongju. An artillery base in the town was the first site selected by the two governments, but President Park Geun-hye decided to consider alternate sites in Seongju after fierce protests by local residents. Experts from Korea and the United States conducted surveys on three sites over the past weeks and settled on the country club, which lies 20 kilometers (12.4 miles) northwest of the artillery base.

The ministry said it chose the country club as the new site because of the timeline of the deployment. “While other sites require massive civil engineering work and infrastructure installation, the country club rarely requires such construction,” it said. “Therefore, it is appropriate to deploy the Thaad system in time.”

The ministry said it will complete the deployment during the next year.

“The Seongsan artillery base and the new site have the same military effectiveness,” said a ministry source. “In fact, we can place the radar on the higher ground in the new site, so we can detect the incoming North Korean missiles faster by a few seconds. If we hurry, we can complete the deployment before the end of the first half next year.”

The country club is located about 18 kilometers away from the Seongju County Office, at an altitude of 680 meters (2,231 feet), higher than the 383-meter elevation of the initial site.

Experts said the higher altitude would help reassure the public that the new location will be relatively free of health hazards. While Seoul and Washington said the system poses no health risks, residents feared electromagnetic waves emitted from its powerful radar.

According to the ministry, about 2,100 people are living within 5.5 kilometers of the country club. Gimcheon, about 8 kilometers away, has a population of 13,000 people.

Even after the location is changed, the primary aspects of the deployment will remain the same. The Seoul metropolitan area will remain outside the range of the Thaad system’s interceptors, while the Thaad battery will still be out of range of the North’s long-range artillery.

Gimcheon residents also planned a protest in Seoul and decided to deliver a complaint letter to the Blue House next week. “We cannot accept the decision to deploy the Thaad at the Lotte country club near Gimcheon after it was pushed out of Seongju,” Na Yeong-min, head of the protesters’ group, said.

Sources at the ministry said they already contacted the Lotte Group to purchase the site and that the conglomerate is generally positive about the sale.

Some have speculated that purchasing the country club will cost more than 100 billion won ($91 million). An approval of the National Assembly, controlled by the opposition parties that oppose the Thaad deployment, may be needed to spend the money, and sources said the ministry may propose a deal to offer land in Gyeonggi owned by the military to Lotte in return for paying the money.

Lotte reacted carefully, as Gimcheon residents fiercely protest the new site selection. “Because sentiments in the nearby areas are bad, we cannot go out to say publicly whether we will do it or not,” a Lotte official told the JoongAng Ilbo. “It is my understanding that various means of land purchase are being discussed.”

It remains to be seen how Beijing and Moscow will respond to the new site selection. China and Russia claim that the deployment will compromise their security interests.