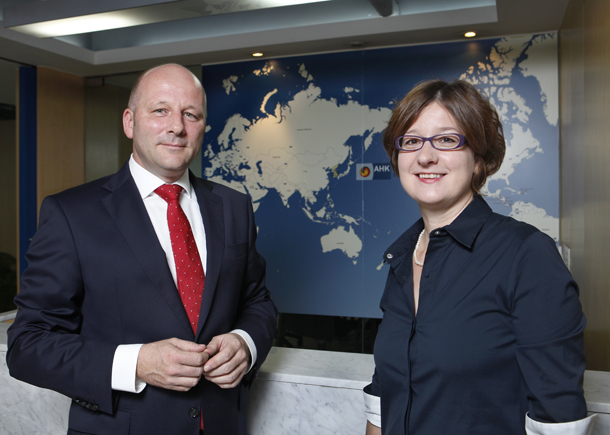 Stefan Halusa, president of the Korean-German Chamber of Commerce and Industry, left, and Barbara Zollmann, secretary general and executive director of the organization, at the chamber’s office in Hannam-dong, central Seoul, after an interview with the Korea JoongAng Daily on Sept. 23. [PARK SANG-MOON]

The Korean-German Chamber of Commerce and Industry (KGCCI) has achieved a lot since its establishment in Seoul in 1981.

The number of member companies it caters to has grown from just five to 500 in the past 35 years, and annual investment made in Korea by German companies has jumped more than 150-fold to $535,804 as of last year on the back of the chamber’s support.

Stefan Halusa, president of the KGCCI, and Barbara Zollmann, secretary general and executive director of the organization, said in an interview with the Korea JoongAng Daily last Tuesday that the 35th anniversary of the KGCCI is “important proof of how the ties between Korea and Germany have developed in many regards.”

“We focus on the business side, and we look at all the companies we’ve worked with and in the meantime help them access the Korean market and help Korean companies in the German market,” said Halusa, who also serves as president of German auto parts maker Brose’s East Asia unit.

“We are very proud of the companies we’ve helped in the past 35 years.”

At a gala it hosted at Some Sevit, an artificial island on the Han River, on Friday, the chamber awarded innovation prizes in four areas - degree of innovation, proven in the market, benefit for the company and benefit to society - to both Korean and German companies.

The chamber’s top managers spoke with the Korea JoongAng Daily last Tuesday at their office in Hannam-dong, central Seoul, to share their knowledge and experience of foreign companies, both German and not, seeking business opportunities in Korea. Below are excerpts from the interview.

Q. What kind of support does the chamber provide?

A. Zollmann: It depends on where the company stands in the process of establishing their business here. At the beginning, they might just want some business information or an overview of the market segment in order to evaluate their own potential success in the market.

We then continue by offering a business partner search and bring them together with business meetings as they still have language and cultural barriers. We also offer office space on the seventh floor of this building. Any German company can start here, using the facilities and renting spaces, and after a while when they are grown, they get to the next phase.

What elements of the Korean corporate sector do they find interesting?

Halusa: Everybody is very impressed by the speed of implementation and activities. Germans tend to plan everything very well and structure well. In Korea, you have to get used to just starting and doing instead of building up plans and structures. That is something we can learn.

The other point is their flexibility and customer focus. Korean companies seem to be very much focused on what various customers require from them. They adjust business models and do exactly what the customers demand. It’s partly due to the fact, I think, that they have a rather limited number of customers. Germany has a broader customer base, so we don’t tune our business models to one specific customer.

The willingness to adjust all of your activities and thinking for customers is important because if it’s good for customers and if they are doing fine, I as a supplier can do fine as well.

What side of Korea does a German company find most difficult after launching a business in Korea?

Halusa: In my experience, it’s the language. It’s mandatory to communicate in Korean in many areas of business in Korea. That is a must.

Second, you have to understand the business structure. Korea, as everybody knows, is dominated by chaebol. They are very much integrated through the value chain. They produce as well as do the trading, retail and wholesale - everything.

For newcomers, it’s very important to understand the market structure here so that they can find their way into the market. Even if the Korean companies use different names, they could be related because there are various steps in the value chain. We don’t have very dominating conglomerates in Germany, and companies are separated in different steps of the value chain. Germans are not used to that relationship between the players and the market here.

Can you name any lesser-known German companies that have shown impressive performance in Korea?

Zollmann: Reinhausen Korea, established here in 2009, has been particularly impressive. It’s one of some 20 global subsidiaries of Germany’s Maschinenfabrik Reinhausen Group.

[Reinhausen Korea began by supplying transformers to the Korea Electric Power Corporation and has diversified its products to include on-load tab changers, a key component of transformers, as well as energy storage systems.]

Has there been any specific change in trends among German companies entering Korea?

Halusa: In the past, companies were coming to Korea for the domestic market. Since Korea has a whole number of globally active world market leaders, it has become an increasingly interesting place to start a business and then go to overseas markets such as China, the United States and India, where big Korean companies are active. There’s a trend toward more technology and more innovative products that help Korean companies, too.