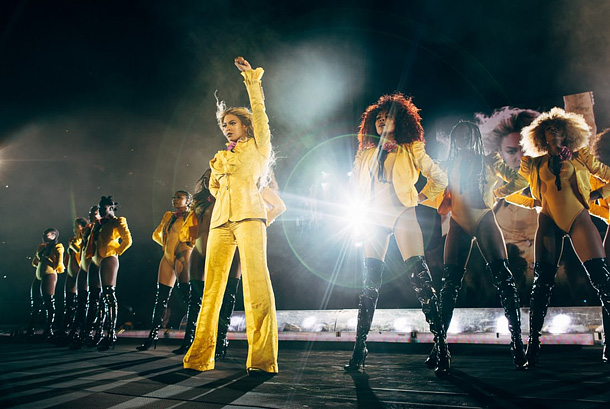 EAST RUTHERFORD, N.J. - Beyonce wrapped up her “Formation World Tour” with onstage assists from Kendrick Lamar, Serena Williams and Jay Z, whom she kissed passionately at the end of their performance before an audience of 80,000, including Hugh Jackman, Tyler Perry and Frank Ocean.

Ballerina Misty Copeland and “Orange Is the New Black” stars Uzo Aduba and Danielle Brooks were also in the crowd Friday night at the MetLife Stadium in East Rutherford, New Jersey, as Beyonce sang and danced excitedly and energetically to songs from her six solo albums, including her latest effort, “Lemonade.”

Jay Z earned loud roars when he joined his wife for “Drunk In Love,” making his first appearance on the top-grossing international stadium tour that kicked off in April in Miami. They were playful onstage and locked lips at the song’s end.

Lamar matched some of Beyonce’s dance moves in a pool of water during “Freedom,” while Williams - who appears in the music video for “Sorry” - brought the clip to life by twerking onstage while Beyonce sang the song.

Jackman entered the floor section of the stadium with his actress-wife Deborra-Lee Furness as fans screamed “Wolverine” as well as the actor’s name.

Beyonce originally was supposed to perform at MetLife last month, but postponed the show to rest her voice. On the final night of her tour, she thanked her crew members, dancers, background singers and more for their work on the six-month tour.

She also thanked her feverish fans for helping her live out her dreams onstage.

“I have so much energy because of you guys feeding it to me. I really wanted to make this show special,” she told the crowd. “This is definitely my dream right here. I dreamt that I would be doing this and I’m actually doing it, and I could not be here without you and your support.

“I wake up every morning I thank God to be able to do what I love and to be able to perform and entertain you guys,” she added. “So thank you for trusting me and allowing me to still be here 20 years (later). Thank you.”