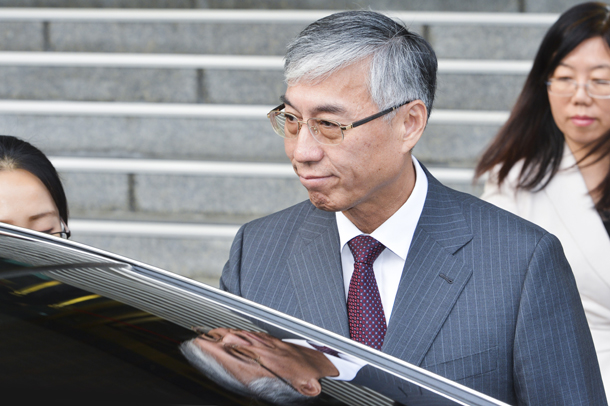 The Ministry of Foreign Affairs here summoned Tuesday the Chinese ambassador over the sinking of a Coast Guard vessel in Korean waters last week by two Chinese boats that were fishing illegally in the area.

Chinese Ambassador to Korea Qiu Guohong was summoned to the ministry in central Seoul Tuesday morning by Kim Hyoung-zhin, deputy minister for political affairs, to formally protest the sinking of the Korean Coast Guard vessel last Friday and demand efforts to prevent the recurrence of such an incident.

This is the second time a diplomat of the Chinese Embassy to Korea was summoned since two Chinese fishing boats rammed into the rear of a Coast Guard speedboat Friday, which was seen as a deliberate attempt to sink the vessel.

The Coast Guard had been inspecting some 40 Chinese vessels for illegally fishing in waters southwest of Socheong Island in Incheon on Friday when a 100-ton Chinese fishing boat, and then a second similar one, rammed the 4.5-ton Coast Guard speedboat.

The Coast Guard shot at the Chinese vessels with K1 rifles, K5 pistols and a grenade launcher, at which point the Chinese boats turned and left.

No Chinese fisherman was injured in the incident, according to the Coast Guard.

In a briefing Tuesday, Cho June-hyuck, spokesman at the Korean Foreign Ministry, said Kim “emphasized that this incident is a serious one that challenged our law enforcement agency directly and systematically.”

The spokesman also said Kim demanded that China “adopt measures for the investigation, arrest and punishment of the vessels and related people as soon as possible, taking into consideration the gravity and seriousness of the situation.”

Korea also urged the Chinese government to take thorough measures to prevent any recurrence, said Cho, and warned that if there is one, “our related authorities will have to take strong action to stop it.”

Qiu was said to have responded that the Chinese government is “sincerely taking responsibility to resolve this issue” and is seeking measures with the Korean government.

Geng Shuang, Chinese Foreign Ministry spokesman, said in a press briefing on Monday that Beijing hoped Seoul will “handle the issue in a reasonable and cool-headed way with the overall interests of bilateral relations and regional stability in mind.”

Korea’s Ministry of Public Safety and Security announced its plans Tuesday to further crack down on illegal fishing vessels, allowing the use of martial force, if necessary.

“In response to Chinese fishing vessels that obstruct the rightful execution of duty,” Lee Chun-jae, vice commissioner of the Korea Coast Guard, said through a press conference in the afternoon, “we will employ all means possible, including using our patrol ships to ram Chinese vessels and seize them.”

Lee added that even if a vessel flees, “we will track it into open waters and arrest its passengers.”

Earlier that day, the Public Safety Ministry, along with other related agencies, including the Foreign Ministry, National Defense Ministry, Justice Ministry and Oceans and Fisheries Ministry, discussed a plan to crack down on illegal Chinese fishing at the central government complex in Seoul.

The number of Chinese vessels detected fishing in South Korea’s Exclusive Economic Zone (EEZ), and near the Northern Limit Line (NLL), the de facto maritime border between the two Koreas in the Yellow Sea, exceeded 100,000 for the first time last year.

But only a handful of vessels fishing illegally were captured by the Coast Guard in the past five years.

Rep. Kim Gwang-lim, chief policymaker of the ruling Saenuri Party, during a parliamentary audit Tuesday, likewise called upon the government for the use of weapons in response to “the unlawful violence of Chinese fishing vessels.”

Kim expressed “shock” that the Chinese vessels tried not only to sink the Coast Guard speedboat once, but struck it twice to make sure the job was done. “This could negatively impact the development of Korea-China relations,” he added.

On Sept. 29, three Chinese fishermen died after their boat caught fire when the Korean Coast Guard threw flash grenades into the bridge for refusing to stop and receive inspection for operating in Korean waters. The vessel had been illegally fishing in Korea’s EEZ without a permit.