Park braces for waves of defections

Park braces for waves of defections 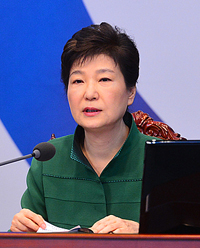 President Park Geun-hye ordered her cabinet Tuesday to prepare for a surge of North Korean defectors, once again urging North Koreans to turn against their government and system.

Park made the remarks in an opening statement at a cabinet meeting on Tuesday. Noting that members of Pyongyang's elite class are abandoning their homeland in search of a better future, Park said their successful settling in the South is crucial to motivating more North Koreans to follow them.

“Defectors are the advance team of unification and they are the test bed of unification,” Park said. “Their successful settlement is extremely important not only for their individual happiness but also to give hope to more North Korean people suffering under tyranny.”

Park ordered ministries to closely cooperate to help defectors settle in the South. “The ministries must quickly establish a system and build the capacity to sufficiently accommodate the North Korean people who will come to the South to find freedom and human rights,” she said.

The government should also put efforts into enlightening the North Korean people about their level of poverty, while their government is spending astronomical amounts on missile launches and nuclear tests, Park said.

She ordered the government to step up efforts to introduce stronger international sanctions. She urged concerned ministries to convince more countries to introduce additional, independent sanctions on the North.

Park said the international community’s response to the North must be so strong that it won’t be able to maintain a minimum level of diplomatic relations unless it gives up the nuclear program.

She made her most provocative proposal at a ceremony to mark Armed Forces Day on Oct. 1. She issued a blunt message to North Korean soldiers and citizens to defect.

The latest comment was a step further as she was asking the South Korean government to prepare for possible mass defections. “In order for the Kim regime to give up its nuclear arms program, we want to maximize not only international pressure on the North such as sanctions, but also pressure from inside the North,” a presidential aide told the Joongang Ilbo.

Park attacked liberal politicians in the South who criticized her strategy. “Recently, some said our government is stimulating the North’s provocations,” Park said. “Some even called [my remarks] a declaration of war. That doesn’t help end the nuclear crisis at all. And it is a complete distortion of facts.”

Her remarks appeared to target Rep. Park Jie-won, acting chairman of the opposition People’s Party and a well-known promoter of engagement with North Korea. After her Armed Forces Day speech, Park said the president’s direct mentioning of mass defection and collapse of the North amounts to a declaration of war.