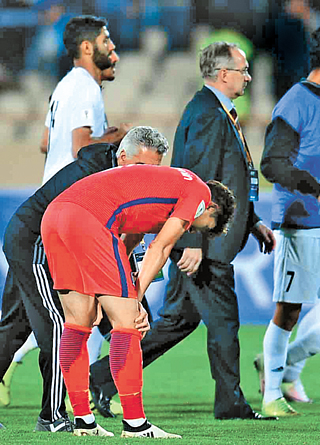 Korean football team manager Uli Stielike, right, walks by as his player Son Heung-min, front, expresses his disappointment after the loss against Iran on Tuesday. [NEWSIS]

After a 1-0 loss on the road against Iran in the final round of the qualifiers for the 2018 World Cup in Russia, it became apparent that the rest of the campaign to Moscow may be a bumpier ride than expected. Above all else, Uli Stielike’s post-game remark gives rise to concerns that the chemistry of the Korean national football squad might be in jeopardy.

The game against Iran looked gloomy from the start. Korea, ranked No. 47 in the FIFA rankings, faced Iran, No. 37, on Iranian soil at the infamous Azadi Stadium in Tehran. The Korean squad had more than just the 11 Iranian players on the pitch to fight; jetlag, unfamiliar atmospheric conditions due to the high altitude of the venue and the intimidating 80,000 Iranian fans packing the stadium wearing black and chanting religious slogans to commemorate the first of two mourning days on the Shia Islam calendar, marking the death of Muhammad’s grandson, Husayn ibn Ali.

Indeed, as Korea did in the past on the six occasions it has played at Tehran, the team was overwhelmed and lost yet again, making the record for games against Iran on their home turf two draws and five losses.

Korea was hoping it would make history by taking its first win from the stadium. Son Heung-min, Korea’s ace player, was in hot form, and Iranian midfielder Javad Nekounam, who has dismayed Korean players in the past with his physical plays and scandalous remarks, had retired from the national team. But none of that seemed to matter during the game on Tuesday.

Unlike in the past, when Korea and Iran often played even matches, the Iranians simply dominated Korea in almost every aspect of the game. Korea failed to record any solid shooting attempts in the first half, and in the midfield as well as in defense, Korea was outplayed by Iran. In terms of shots, the pace of the game, offensive as well as defensive hustle plays and set piece plays, Korea had virtually no upper hand. Even Son’s attempt to put something on the board seemed futile. The defense of the Iranians, who have not conceded a single goal in the past three games of the qualifiers before Korea, was simply too packed for Koreans such as Son to penetrate.

While the Iranian defense shut down Korea’s attempts to score, it was Sardar Azmoun, who also presented Korea and Stielike a heartbreaking defeat two years ago during a friendly by netting the game winner, who lifted the Iranian team again this time around by registering the lone goal of the match in the 25th minute. Even after Iran took the lead, they did not waste any time with stalling tactics, unlike what many anticipated the Iranians would do. Instead, Iran pushed ahead with a relentless attack and sharp passes, trying to add more goals to the scoreboard rather than maintain a slim lead.

Throughout the game, it was crystal clear that Iran deserves to be at the top of the standings in Group A and that Korea simply lacks what it takes to be there.

But more so than the game itself, what was more unsettling was the postgame remark made by the German-born skipper for the Korean squad. “We don’t have any strikers like Sebastian Soria [the Qatari striker who was naturalized to Qatar from Uruguay]. I think that was the main reason behind our loss,” said disgruntled Stielike after the match. “Our forwards lacked confidence and were completely outplayed by Iranians in shooting or one-on-one. I put in Kim Shin-wook in the second half hoping he would flip things around, but this did not happen.”

His remark raises questions about whether it was the right attitude to take when the players depend on him for leadership in their journey to the World Cup. Stielike has since held a press conference to explain that he was merely trying to motivate his players, and apologizing for making the comments while he was frustrated over the loss.

After the remark, Son expressed his discontent with the statement, saying, “I think it is regrettable that he compared our players with those from other teams, undermining our morale. We tried to show everything we have on the field and worked hard to make history today and we failed. But, we do have capable players on our team.”

Ki Sung-yueng, the captain of the team, said about the remark, “I think it is sometimes difficult for Stielike to communicate with the Korean media since he himself is not a Korean. Even I would be upset if I were the manager and could become emotional.”

Ki added, “It’s difficult to say what went wrong precisely except that many aspects of the game were disappointing for us. I myself as a captain am disappointed. Although I had to play defensively, I should have played a more offensive game.”

Despite the loss, the captain said it is far from over. “We are in a pinch right now, but it is not over. Taking lesson from today’s game, we will make sure we do better next time. There is no need to hang our heads.”