Twins beat Tigers to sail ahead

Twins beat Tigers to sail ahead 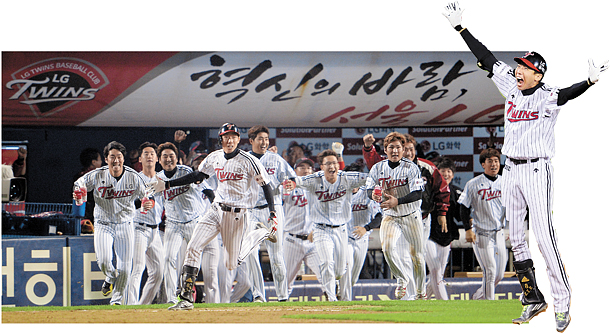 LG Twins players rush the field after Kim Yong-eui, fourth from the left, fired a walk-off sacrifice fly, securing their spot at the next round of the playoffs. [NEWSIS]

What a game the LG Twins and the KIA Tigers gave fans.

In the second game of the wild-card series of this year’s Korea Baseball Organization (KBO) postseason, the Twins and the Tigers played the game of their lives, keeping each other in check and the scoreboard clean until the very last inning. Yet the game itself was rife with phenomenal plays, and at the end of the day, it was the Twins that came out smiling. As dramatic as the game was, the end was as theatrical, with the Twins taking the win in walk-off fashion.

Although the Tigers were victorious in the first game of the series on Monday, the Twins entered the postseason with a one-game advantage due to their performance in the regular season, leaving the scores tied at 1-1. The winner of Wednesday’s game would advance to the first round of this year’s KBO playoff while the loser would face the end of their season. But despite all the pressure and jitters, the two clubs delivered a truly impressive postseason performance.

One of the most riveting spectacles was the matchup of their starting pitchers, Ryu Jae-kuk of the Twins and Yang Hyeon-jong of the Tigers.

Ryu, who pitched eight innings during Wednesday’s game, had a perfect stint, conceding only one hit while on the mound and no runs. Starting from early in the game, Ryu was as stable as any pitcher could be. He retired batters left and right with cut fastballs, which have become his trademark pitch in the latter half of the season, consistently throwing batters off their timing.

During his shutout game, Ryu went no-hitter up to the end of the fifth, only giving out four walks. The only jam of Ryu’s otherwise flawless assignment came in the sixth when Seo Dong-wook, the lead hitter of the Tigers, belted Ryu’s changeup over the right fence, which was called foul after video analysis. Seo was then grounded out to the center but Ryu gave out his only hit of the day during this inning, a double by Brett Pill.

By the end of the seventh, Ryu had tossed 104 pitches and spectators expected a pitching substitution in the eighth. But to everyone’s surprise, the former big-league pitcher came on the mound once more. With one out and a runner on base, Ryu retired Pill with three strikes and ended the inning with the Tigers shortstop Na Ji-wan grounding out during the next play.

As high as the stakes of the games were, Yang Sang-moon, the Twins manager, said he wanted to trust the captain of his team. “Ryu did not lose his power and I wanted to count on him for as far as he could go,” Yang said. Closer Lim Jung-woo relieved Ryu in the ninth and became the winning pitcher of the game. But at the end of the day, the Player of the Game honor went to Ryu.

After the match, Ryu said, “Tigers’ fans were loud and it made me nervous. I was nervous the entire game but nevertheless focused. I also wanted to beat Yang this time around. ‘I have to keep this game scoreless,’ I thought to myself. I think reaching this far itself is a tremendous accomplishment for us. Rather than putting pressure on the players, I want us to enjoy this game from now on.”

Although the Tigers lost, their starting pitcher Yang was impressive, even in comparison to Ryu. Mixing up his pitches with fastballs, sliders and changeups, Yang tossed six shutout innings while allowing five hits. He was relieved by Yoon Suk-min.

And then there were the outstanding saves by fielders.

At the bottom of the third, the Tigers’ third baseman Lee Bum-ho made a diving catch to his left to grab a grounder by the Twins’ Lee Hyung-jong with two runners on the base and one out. Lee’s catch saved at least a run. He also retired the next batter, Park Yong-taik, chasing after the foul fly ball near the left wall to bag it with his glove and end the inning.

But the highlight of fielding was arguably the diving catch by Ro Soo-kwang at the bottom of the eighth. With a runner on third, the Twins’ batter Yang Suk-hwan cranked a hit to shallow right, which seemed at least a single from the look of it. But Ro, the right outfielder of the Tigers, rushed in and lunged forward for a diving catch, which ended the inning as well as the Twins’ rally to score a run.

After the neck-and-neck bout between the Twins and the Tigers, the game came to its inevitable end. Zeke Spruill, the Tigers’ closer, came to the mound at the bottom of the ninth with one out while the Twins quickly loaded the bases. Kim Yong-eui came to the plate and sent a towering hit to the left. Kim’s sacrifice fly was the walk-off hit of the game, as it brought Hwangmok Chi-seung home and the win.

“That was perhaps one of the most exciting games I have seen in a while,” said a Twins fan after the game. “I was on the verge of tears after the game. I had to hold my breath especially in the later innings. What a game.”

The Twins’ win over the Tigers allows them to progress to the next series of the postseason. They will travel across Seoul to take on the Nexen Heroes today at Gocheok Sky Dome, the home of the Heroes, for the first game of the first round of playoffs.