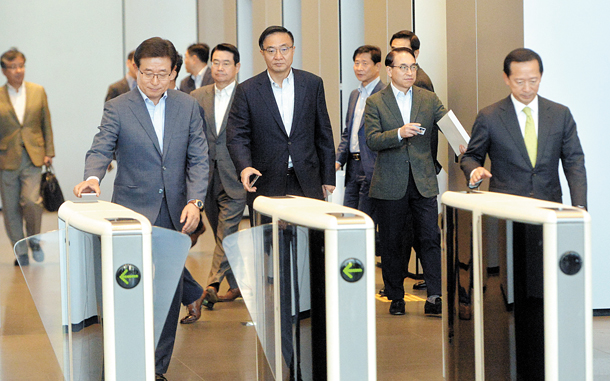 Samsung Electronics on Wednesday released adjusted earnings estimates for the third quarter, reflecting the fallout from the debacle involving its Galaxy Note7s, which it decided to discontinue a day earlier.

Samsung is set to unveil confirmed earnings results on Oct. 27, when its shareholders are also scheduled to meet to decide on key management-related issues.

Without the strategically crucial flagship model for the latter half, Samsung is left with the challenging task of tackling the double whammy of the void of new models to compete against Apple’s upcoming iPhone 7 and its severely tainted reputation.

Brokerage houses scrambled to revise their forecast for earnings results for the nation’s most valued company beyond the third quarter, in the wake of a botched recall of 2.5 million Note7 units. Some securities firms, including Kiwoom, predicted the shockwave may stretch as far as next year, whereas a few others dragged down target prices of Samsung shares.

“The discontinuation of the Note7 has damaged Samsung’s brand image and credibility, eventually dealing a blow to upcoming sales of smartphones,” said Song Myung-seop, an analyst at Hi Investment and Securities.

Song added, “When considering the development period for an upcoming model, the scrutinized review process and increased marketing expenses, the ongoing scandal will hurt the earnings through the end of next year.”

Shares of Samsung closed down 0.65 percent at 1,535,000 won on Thursday. Hi Investment and Securities, adjusting its target share price from 2 million won to 1.9 million on Wednesday, said in a report ditching the 4.3 million units already produced will incur an estimated 3 trillion won in direct losses. The phablet, whose shipping began on Sept. 19, had been projected to sell between 4 million and 6 million units of by the year’s end.

The Korean tech bellwether has no choice but to rely on the Galaxy S7 and its curved-screen cousin, the S7 Edge, for domestic customers - many of whom still consider Samsung the best option for smartphones as well as other consumer electronics gadgets - until it comes up with the Galaxy S8, set to be showcased in February, given precedents.

Samsung has made it a rule to launch sales of its S series in March and its Note series six months later. This year, the company moved the timeline for the Note7 up 10 days to sell more phones before the arrival of the iPhone 7, and the decision is cited by many experts as one of main causes for its unprecedented failure. Samsung has yet to discern what went wrong with the devices, after it was made public that the battery was not the problem.

Key features that distinguish the Note7 from the S7 and S7 edge are its waterproof S Pen, a stylus, and iris scanner. Industry insiders say Samsung is rushing to boost production volume of its S7s and S7 Edge and resume marketing campaigns, including commercials, as archrival Apple is scheduled to unleash its iPhone 7 in Korea on Sept. 21.

There is also a chance that LG Electronics would enjoy the reflected benefit from smartphone users who lost interest in Samsung phones, opting for its latest V20 smartphone as an Android operating system alternative. Outside Korea, the Note7 failure may also prop up sales of the new Google Pixel phone ahead of the important year-end holiday sales season.

Speculation quickly emerged from some Korean media outlets that Samsung would advance the date for its Galaxy S8 release or would scrap the Galaxy name, but both Samsung insiders and experts said both scenarios are far from plausible.

“It won’t be too easy to ditch a brand that is already well recognized in the global market,” said Lee Byung-tae, professor at the Kaist College of Business. “In a small, local market, it’s easy to abolish a brand but the cost for promoting a certain brand in a big market is enormous.”

A Samsung spokesman said debuting the Galaxy S8 earlier than previous years has not been decided. Park Yoo-ak, an analyst at Kiwoom Securities, said the timeline for component production won’t realistically allow advanced release of the S8.

“Samsung must seriously focus on the S8 to be unveiled in the first quarter,” said Kim Ji-san, another analyst at Kiwoom, adding that “quality control” should be the top priority before functional and design improvements.

All three telecom service operators in Korea said on Wednesday they will begin offering compensation or exchanges for Note7s today.

Customers may replace their Note7s with either other Samsung smartphone models or those from other producers and receive the margin from the transaction in cash. To do so, they must visit the store where they initially bought the problematic phablet.