After loss and remark, Stielike takes the heat

After loss and remark, Stielike takes the heat 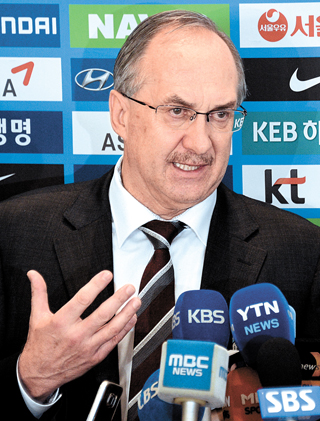 The atmosphere at Incheon International Airport on Thursday was heavy as Uli Stielike, the manager of the Korean national football team, walked out to the terminal. After a 1-0 loss to Iran and subsequent controversy regarding his comments, the German-born skipper had a stern expression on his face.

“Returning home without any result to show for, I feel heavy-hearted,” said Stielike to the media at the airport. During the fourth match of the final round of the Asian qualifiers for the 2018 World Cup on Iranian soil, Korea suffered a 1-0 loss, a score that could have been much worse considering the inferior level of performance it showed in comparison to the Iranians. After the loss, Korea fell to third place in the standings of Group A after Iran and Uzbekistan. The skipper blamed Korea’s lack of strikers comparable to Sebastian Soria [the Qatari striker who was naturalized to Qatar from Uruguay], which some criticized as detrimental to the morale of the team. Some in Korea even started to question his leadership.

“I was trying to say that we should analyze Soria’s performance and play well next time,” Stielike was quoted as saying by Yonhap News Agency, who insisted that the entire thing was just a big misunderstanding. “I mentioned Soria in the morning of the game to motivate Ji Dong-won [Korean striker].”

When asked whether his remark might have harmed the trust between him and the players, Stielike said, “With the players I came home with [eight K-Leaguers], we had a conversation [about the remark]. I also had talks with those who left early to join the teams overseas. I do not wish to leave any room for misunderstanding.”

Kim Shin-wook, a forward for K-League’s Jeonbuk Hyundai Motors, said about the issue, “I was dumbfounded at first but it is all good now. Some of the players playing overseas, they actually were worried about the manager. There is no friction between the manager and the players.”

Stielike also discussed the starting lineup he’s picked, which also came under heat. During the match against Iran, Stielike sent in Jang Hyun-soo, normally a central defender, as a fullback. But Jang looked unstable playing in an unfamiliar position.

“I concur that Jang is a fitting talent for central defender. But after right back Cha Du-ri [retired] and left back Kim Jin-su [playing for TSG Hoffenheim of Bundesliga and was excluded from the roster as he is unable to see any playing time at his club], I have not been able to find any replacement. No one has set their starting spot at either side of the back, which is why I put in Jang.”

To address calls for his resignation, Stielike responded, “In the past 12 years, 10 different managers oversaw the Korean team, about 15 months on average each time. What did Korea gain? If I am asked to step down, I would consider it unlucky but whether bringing in a new manager will instantly improve the performance of the players should be considered.”

Korea, hoping to make its ninth consecutive World Cup appearance at the 2018 World Cup in Russia, will host Uzbekistan at Seoul World Cup Stadium in Seoul on November 15. Uzbekistan is ranked second in the group with three wins and one loss. “Regardless of my whereabouts,” Stielike said, “I will help the team prepare as well as it can for the match.”