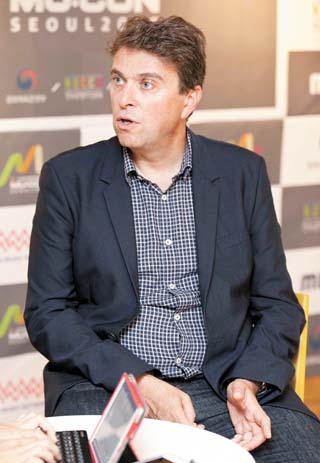 The independent music scene in Korea is a niche subject. Although mainstream K-pop artists have managed to gain a large following internationally in a relatively short period of time, indie acts have nowhere near the same level of publicity. Opportunities for greater exposure are miniscule, due to the extreme saturation of produced acts competing for spots on television and radio, and having the same level of success as an independent artist in Korea compared to other nations is challenging due to the current system of on-demand music consumption in the country.

Many local indie artists juggle part-time jobs teaching or waiting tables while playing shows to empty audiences at night. Most acts fizzle out over time, as a career in music can no longer sustain these artists.

“It’s frustrating,” said Do Joong-mo, guitarist of indie rock band Magna Fall. “I know change has to come, but I can’t even imagine where to begin. Opportunities are being taken by mainstream idols, and the only real chance for indie acts to get exposure is being reduced because of decreasing interest from listeners. We can’t sustain ourselves with music, so we can only follow our passion in our free time.”

Charles Caldas, CEO of the Merlin Network, remains optimistic. As the global rights distributor in the independent label sector for over ten years, Merlin oversees digital licensing rights of over 20,000 independent labels worldwide, including the Korean label DFSB Kollective. Any company can choose to partner with Merlin as long as it meets their membership criteria, which is listed on their website, and fill out their relatively basic form.

According to Caldas, independent labels accounted for 32.6 percent of the U.S. music distribution in 2013, giving these labels a much greater negotiating power than imagined. After striking a licensing deal with music discovery service Pandora in September, the CEO says business for independents is at its strongest yet.

“We are right at the moment of a digital revolution,” Caldas said during his seminar at the 2016 Mu:Con conference at Digital Media City, eastern Seoul, on the importance of streaming in regards to the music industry. “Change always brings fears and criticisms, and people think it will hurt in the long term. We think change is inevitable.”

In regards to exactly what this “change” means, the Merlin CEO says digital streaming and music discovery is the answer, and next step in the evolution of music consumption. Caldas sat down for an interview with the Korea JoongAng Daily to discuss this very subject.

What are your views in regards to streaming for Korean indie acts?

There’s an audience for every kind of music, and reaching that potential audience is important. At Merlin, we have done the analysis for Korean indie labels, and were surprised to find that much of the consumption came from outside Korea. Forty-five percent of streams came from North America, and they had a strong following in Europe as well. The big difference between K-pop or the really obscure indie artist was finding the correct audience, which was impossible in the physical realm and [through] purchasing CDs. Now, there are newfound opportunities in the digital space.

What needs to happen for the Korean music market to embrace music discovery?

Many people have not grown up with radio, so they don’t realize these discovery services can provide new music. They don’t realize the amount of music that is out there, so it’s up to the service to promote it. It’s a question of evolution. It’s tougher at an early part of streaming to make money in the short term than from selling a CD for indie artists. But in the long term, the consumption of music from streaming will generate revenue every time it’s played. It’s better if you can attract a fan base. All parties, from the artist to the consumer, need to be open to this new idea so that the value can go around.

What is your response to criticisms of streaming services being unfair to the artists?

As we said before, there’s always going to be press about streaming being bad. I think much of that is based on data that are incomplete. Despite all of that, at the core, the fundamental business model is changing. We are right at the beginning phase, and the most turbulent period for artists. More and more people are paying for streaming services, and now, labels can afford to pay 70 percent to artists as compared 15 percent from a decade ago. The industry has not yet adapted to the new model. If you are an artist that signed a contract based on that older physical model based on CD sales and distribution, it is incompatible to the digital distribution model of streaming. It’s much cheaper, and the potential artist can take a much larger sum of the profits earned.

What made you decide on the deal with Pandora?

Our deal with Pandora was done because they had a model designed for indies to do very well. The discovery model is really important to put some shape about finding the correct audience. It was designed with the thought of bringing more exposure. In a changing world like this, you have to take opportunities where they are presented. It seems like most opportunities, however, are only going to the three major international labels. We thought it was important for us to help a business model that actually helped indie’s. Now that Pandora is doing better, so are indies.

How can you be sure independents are doing better with this new digital streaming?

The key facts are that in this market of change, two-thirds of our independent labels grew their overall business. Streaming was a major percentage of their revenue. Our labels are optimistic of our future. Consumption is now based on a global fan base, and we constantly see global markets emerging thanks to streaming. Also, Merlin only charges a 2 percent fee and all of our profits go back to the labels. We saw our revenues gone up from 30 to 70 all the way up to 400. That’s a lot of money we can pass really quickly back to our labels, which helps to grow business as fast as possible, and more that artists can earn. Most of our labels have also signed a fair deal negotiation, and although we can’t follow every deal, you have to remember what the necessary conditions are for running a successful label. The industry relies on value flowing to all parts of the market.

What other benefits can Korean independent labels see by participating in digital streaming?

Merlin has worked with Korean labels for a long time. They participated with us because they are interested in the global music scene. Being part of that world would also allow them to organize global deals with companies such as YouTube. It’s a great way of quickly reaching the world market. They are now part of a community of global companies, and they are learning from each other about their business.

What advice can you give to people that want a career in music?

The first thing is to decide which part of the industry is exciting to you. Really just throw yourself into it as much as possible. Learn as much and use your local connections. If I think of my path, I was a musician too. I never thought I would be interested in the industry aspect. But then I thought how I am going to get paid. We have to live and pay for studios. Eventually revenue flow, sales and contracts interested me. I actually started by packing boxes in a warehouse. The industry is very complicated now, and you can really specialize. As with everything you have to work hard, but you need an open mind and be willing to work every day.