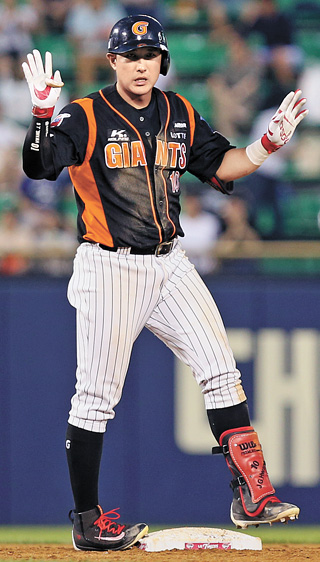 The Lotte Giants, one of the more popular teams in the Korea Baseball Organization (KBO), concluded the 2016 season in a rather disappointing fashion, finishing eighth with a 66-78-0 (win-loss-draw) record. Obviously, the Giants have some homework to do during the coming off-season to remedy what went wrong this season and prepare for the next. One of the impending issues to resolve for the Giants is making their franchise star, Hwang Jae-gyun, stay with the team.

It’s been a long season for the Giants. While their rival clubs, the LG Twins and the KIA Tigers, have all made it into the playoffs, the Giants have packed their bags after the regular season. Granted, their final game against the Nexen Heroes on Oct. 9 was a win, but the Giants have learned they have things to mend if they are going to see some light next year. Above all else, the whereabouts of Hwang could make all the difference in the world.

Hwang is turning a free agent (FA) and in the 127 games he’s played this season, he batted .335 while tallying 27 dingers and 113 runs batted in. His on-base plus slugging stands at .957, an indicator of his ability to get on base and hit with power. He also has an impressive batting average with runners in scoring position at .411, ranking him fourth in the league in the category. He also leads the league in the number of game-winning hits with 16 total, making him a desirable talent to bat fourth in batting order.

The fourth batter is normally called a cleanup hitter and the position is designated to one of the best hitters on the team. Obviously, the 29-year-old third baseman can assume a significant role in the Giants’ attempt at a solid season next year.

Above all else, insiders say that Hwang is an exemplary case of a player who overcame his weaknesses from the previous season. Towards the end of the season in 2015, Hwang struggled as he lacked the endurance to withstand the six-month long season.

Knowing what went wrong, he prepared himself as soon as the season ended, going through intense conditioning programs. He also calibrated his batting form to minimize the physical toll it had on his body and grew indifferent about the record for the most consecutive games played. Hwang didn’t miss a single game from July 8, 2011, against the SK Wyverns until April 29, 2016, against the NC Dinos. His streak came to a halt when he suffered a broken toe in April, but instead of pushing himself to play with an injury for the sake of the record, he took time off for recuperation, prioritizing his contribution to the team rather than his own personal record. As a result, Hwang enjoyed a consistent season, rather than having significant ups and downs.

Thanks to his fruitful season, Hwang will hold that much more value as he turns FA.

Before Hwang, third baseman such as Choi Jeong, who now plays for the SK Wyverns, and Park Sok-min, who right now plays for the NC Dinos, have witnessed their salaries skyrocket. In late 2014, Choi signed a four-year deal with the Wyverns worth 8.6 billion won ($7.7 million). Park signed with the Dinos prior to this year a four-year deal worth 9.6 billion won. It is expected that Hwang may receive a similar offer during the FA signing period this year.

The Giants felt the gravity of Hwang’s absence in the 17 games he’s missed this year. Fans know it, too, and many are calling for him to stay even after he turns FA. Although not a franchise star from the start, he spent seven seasons with the Giants, accumulating fans along the way.

Last year, the Giants spent 13.8 billion won, dropping four billion to make FA Song Seung-jun stay put, while reeling in FAs Son Seung-lak and Yun Kil-hyoun by offering them six billion and 3.8 billion. Little did they know the investment would be a grand failure. Added to this, with the sponsor company Lotte Group mired in controversy, it is questionable whether the Giants will be able to spend enough to get Ryu to stay.

Whether Hwang stays or not will also impact the Giants’ selection for foreign players. If Hwang remains, the Giants are likely to pick either a first baseman or an outfielder. But if he leaves the team, the Giants will have to find a talent to fill his void on third. “Everything comes down to whether he stays or not,” said Jo Won-woo, the manager of the Giants.