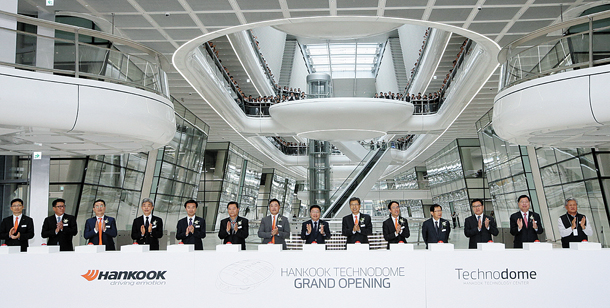 Suh Seung-hwa, CEO and vice chairman of Hankook Tire, sixth from right, and other executives celebrate the opening of the company’s new research and development center, “Hankook Technodome,” in Daejeon on Tuesday. [HANKOOK TIRE]

DAEJEON - Hankook Tire, the nation’s top supplier of tires, opened its new futuristic research and development center in the Daedeok Research Complex here on Tuesday, the latest effort by the company to enhance its technological status.

Designed by Foster + Partners, the London-based architecture firm that remodeled the Apple campus, with a total investment of 266.4 billion won ($236 million), the new center, which the company is calling “Hankook Technodome,” has over a million square feet of floor space in its six stories and contains cutting-edge facilities that at first might not seem connected with tire manufacturing.

“Hankook Technodome will act as a central hub of our global R&D centers located around the world and will lead the way in developing primary technology in producing high-quality tires as well as state-of-the-art technology that can adapt to the current driving environment,” Suh Seung-hwa, vice chairman and CEO of Hankook Tire, said at the ribbon-cutting ceremony on Tuesday.

“We have said before that this establishment will signal a paradigm shift for Hankook Tire,” said Cho Hyun-bum, president of the company. “It is extremely hard to anticipate the current auto industry with boundaries between other industries slowly falling apart, as shown with many IT companies jumping into the business. That is why this Technodome will be crucial for us to become a global top-tier manufacturer in the future.”

Hankook Technodome is the only tire research center in Korea equipped with a so-called driving simulator and suspension parameter measuring machine that allows researchers to virtually test the performance and quality of tires and record all results digitally. Everything from raw material analysis to car testing can be done at the space, according to the company.

The Technodome will act as a coordinator for Hankook Tire’s four other research centers in Germany, China, United States and Japan.

Hankook Tire hopes the new space’s location in the central part of South Korea, adjacent to the company’s production line in Daejeon, will generate synergy between the development and manufacturing arms.

From afar, the research and development center resembles a giant spaceship.

Ten buildings surround a central plaza that is all connected by a single extended roof. Utilizing eco-friendly materials and technology for construction, the Technodome was the first establishment in Korea to receive a gold rating from the Leadership in Energy and Environmental Design certification program.

“It wasn’t merely about the aesthetic value,” President Cho said. “We wanted to tell the public that Hankook Tire’s brand essence is trendy and high-tech.”

Hankook Tire provides tires to several domestic automakers as well as overseas brands like Mercedes-Benz, BMW and Porsche. It is the world’s fifth-largest tire maker by production capacity and seventh largest in terms of revenue.