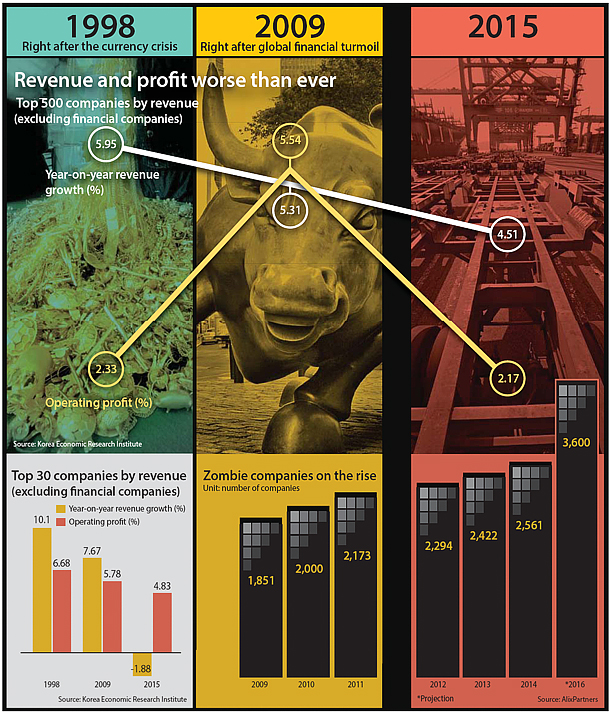 Korean conglomerates that have been the driving force behind economic growth have lost momentum, according to a recent analysis.

Statistics on the profitability and growth rate of Korea’s top 30 companies by revenue show they are in a worse situation than the global financial crises of 1998 and 2009.

JoongAng Ilbo and the Korea Economic Research Institute, a private think tank, looked at the operating profit of the 30 companies, and the figure has been on a downward slide from 6.68 percent in 1998 to 5.78 percent in 2009 and to 4.83 percent last year. In the manufacturing industry, in particular, an operating profit of 5 percent is considered the bottom line that allows any company to make investments that won’t immediately affect revenue - such as research and development.

The top 30 companies’ year-on-year revenue growth rate has been slowing too. In 1998, it registered 10.1 percent and 7.67 percent in 2009. But last year, the figure posted negative growth at 1.88 percent as the economy scaled back.

Those 30 companies count, given that their combined revenue accounted for a whopping 59.78 percent of a pool of the top 500 enterprises in Korea last year.

“Simply comparing the earnings results for three different years won’t suffice, but the fact that the figures for 2015 are worse than those of 1998 and 2009 means a lot,” said Kim Yun-kyung, a researcher at the Korea Economic Research Institute, a private think tank.

The increased possibility of those large companies going bankrupt is also threatening the Korean economy. A report on the risk of insolvency at Korean companies as of the second quarter of 2016 from AlixPartners, a New York-based consulting firm, shows 25 percent of 109 conglomerate subsidiaries could enter court receivership or corporate workout programs in two years.

Should the situation with the subsidiaries of major chaebol worsen, their smaller business partners, including suppliers, will undergo hardship, which results in shrinking household economies and consumption, leading to the vicious circle of shrunken revenue at conglomerates.

The past two economic crises had relatively easier solutions, given that their cause was clear. After the currency crisis in 1997 and 1998, Korea recovered with exports propped up by the strong won versus major currencies including the U.S. dollar. The global economy was strong at the time. In the second turmoil, Korea’s globally competitive key industries - electronics, shipbuilding and automobiles - targeted overseas markets, which then had ample liquidity.

But the current crisis in Korea is much more serious because those industries have lost their competitive edge.

“Korea needs to make quality-wise transformations in the fields of labor and education as well as in the overall society,” he said. “It will be necessary for the government and corporate sector to discuss together to come up with solutions, but more important is establishing a body that is able to come up with measures and carry them out, not one that is far from effective.”

The real economy has been slowly aggravating in recent years in Korea, negatively affecting various economic indicators. And the so-called zombie companies, which refer to those in need of bailouts or indebted ones, are particularly weighing on the indicators.

The number of zombie companies drastically increased in the past couple of years, according to an analysis by AlixPartners. The percentage has risen about 1 percentage point since 2009, when the figure stood at 8.2 percent, or 1,851, to reach 10.6 percent in 2014 and could make up as much as 15 percent by the end of this year, according to AlixPartners’ projection.

As the aggravation of real economy led by big companies gains momentum, the local economy has been hit hard. Speculation is high that the so-called heavy and petrochemical belt in southern Korea - Ulsan for automobiles; Geoje, Tongyeong and Yeongam for shipbuilding; Busan for shipping and Yeocheon for petrochemicals - is on the verge of collapse.

On Monday, the Daebul Industrial Complex in Yeongam, South Jeolla was silent as if it was the weekend. Most of the cranes designed to assemble modules for vessels were idle in the middle of the day. It was hard to find any workers at the shipyard. Banners reading, “Urgent sale of a factory” or “Immediate loans available” were spotted on the empty eight-lane road.

“Until about three to four years ago, the sound of hammering metals was heard around the clock, but now less than 60 percent of factories here are operating,” said a shipbuilding employee.

A CEO of a company inside the complex that produces vessel modules for wiring and plumbing said half of his employees are on leave without pay after orders stopped in June. An employee at another shipbuilding-related company said a flurry of companies there are poised to shut down and sell their equipment.

Industry insiders say Korea is in urgent need of a headquarters that will be responsible for executing bold restructuring and fostering new growth engines as well as long-term plans for Korea, Inc.

Kwon Tae-shin, head of the Korea Economic Research Institute, says Korea quickly recovered from the 1997-98 currency crisis on the back of high economic growth but the economy has been losing momentum gradually - like the frog in warm water, often used to describe the current state of the Korean economy. As the analogy goes, the frog, when placed in water with an optimal temperature, does not realize it’s being killed as the temperature slowly rises to eventually boil.

“The Korean government should go ahead with cleaning up zombie companies with little potential of recovery and with spearheading the restructuring process for any key industries,” he said.

Lee Hang-goo, senior researcher at the government-funded Korea Institute for Industrial Economics and Trade, said, “[Conglomerates say they] are fostering new growth engines but they cannot possibly excel at an industry that they have never dealt with before,” adding that companies are advised to find opportunities in industries in which they were already good.

Song Byung-nak, former professor of economics at Seoul National University, said Korea is still in a 100-meter sprint, when global companies from outside of Korea are making strategic moves to compete.

“Korea needs more think tanks or strategy organizations funded by the government to study the nation’s future competitiveness,” he said.

Some experts say Korea needs to execute large-scale innovation in manufacturing, its key growth propeller. Kwon Hyuk-se, former chairman of the Financial Services Commission, a financial watchdog, points out that Korea failed to realize that the recession would last longer than expected during the 2009 financial downturn. The country could have embarked on a major restructuring then, he said. Instead, it only made micro-prescriptions for each company, providing funds whenever necessary.

“It’s not too late for Korea to jump on the bandwagon of global industrial trends that shifts focus from traditional manufacturing to innovative businesses,” he said.

Lee Jeong-dong, professor of industrial engineering at Seoul National University, stressed the importance of the system that allows and amasses trials and errors made by companies.

“Large companies have been maintaining the practice of selling a business unit that shows visible outcome - based on their return on investment - but that has hindered them from accumulating data on what leads to success and what leads to failure,” he said. “We should keep in mind that those small but strong companies in Germany, better known as ‘hidden champions,’ could rise after repeating trials and errors in a single field.”