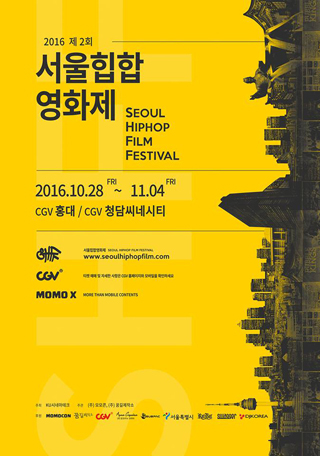 The Seoul HipHop Film Festival will be held at the CGV theaters in Cheongdam and Hongdae in Seoul for eight days starting on Oct. 28.

The festival will feature a variety of celebrated films dedicated to hip-hop culture, including the documentary “Bad Rap” (2016), which is about four Asian-American rappers (Dumbfoundead, Awkwafina, Rekstizzy and Lyricks) trying to make it big in hip-hop in the US. The film’s director Salima Koroma and producer Jaeki Cho will also make a special appearance on Oct. 29 for a special question and answer session with the audience.

The event will attempt to feature a variety of topics related to the genre, from “Something from Nothing: The Art of Rap” (2012), which focuses on the craft of writing lyrics, to “Fresh Dressed” (2015), which is a film that chronicles the history of hip-hop and urban fashion.

Korean hip-hop artists will be making appearances at the film festival as well. Some of the stars that will appear include rappers Jinusean, Lee Ha-neul from DJ DOC and BewhY. Tickets go on sale today.