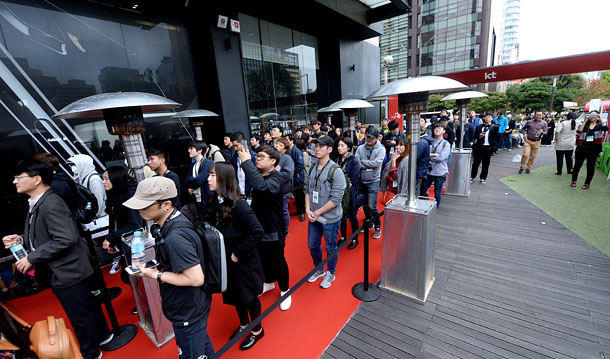 Customers wait in line to buy Apple’s iPhone 7 at KT’s Olleh Square in central Seoul as the sales began on Friday. [OH SANG-MIN]

The long-awaited iPhone 7 series began sales in the domestic market on Friday at 8 a.m.

Customers lined up at launch ceremonies at the three national carriers - SK Telecom, KT and LG U+ - as expectations for the latest Apple phone skyrocketed in the wake of rival Samsung Electronics taking the exploding Galaxy Note7 off the market.

The three mobile carriers, concerned about losing momentum for phone sales in the latter half of the year due to the Galaxy phablet debacle, have been aggressive in marketing efforts to sell more iPhones.

One such effort was the early disclosure of the iPhone 7’s official market price and the amount of subsidies each carrier will provide. While prices are normally disclosed on the official launch day, they were released a week earlier when preorders began.

Analysts say sales of the iPhone 7 should be buoyant, as there are not many options after the shutting down of the Note7.

Mobile carriers have also come up with services dedicated to iPhones, a new marketing technique. KT offers “iPhone Changeup” service, which offers an attractive discount to customers who return the iPhone 7 a year from now to upgrade to a later iPhone. Other carriers offer similar services under different names and terms.

Over 200 customers lined up for KT’s launch ceremony Friday. Thirty spent the night on the pavement. The crowd did not include Galaxy Note7 customers defecting to Apple, the company said.

The first customer to get an iPhone 7 through KT was 25-year-old Yoo Byung-moon, who spent three nights and four days in front of KT’s Gwanghwamun headquarters in Jung District, central Seoul, waiting for the release.

“I heard the No. 1 customer last year waited two nights and three days so I came a day earlier this year,” Yoo said.

Yoo bought the larger iPhone 7 Plus in the hot new jet black color with a storage capacity of 128 gigabytes. His reward for his time on the pavement: a waiver of his 65,800 won ($57.98) monthly calling plan for one year, an iPad Pro 9.7 and an Apple Watch Series 2.

At the same time in Gangnam, SK Telecom held its own launch ceremony, attracting about 150 preorder customers. LG U+ held events at nine of its stores and attracted 150 people at three branches in Seoul and 500 nationwide.

But reports from around the globe raised the possibility that the new iPhone was having problems similar to the Note7.

Yahoo 7 News on Thursday reported that an iPhone 7 owned by surfing instructor Mat Jones in Sydney exploded and damaged his car after he left the phone in the car to give a surfing lesson.

The instructor bought the phone one week earlier and said he hadn’t dropped it or used a non-Apple charger, according to 7 News.

Previously, a man who bought an iPhone 7 last Wednesday reported a similar explosion through a Chinese media agency.