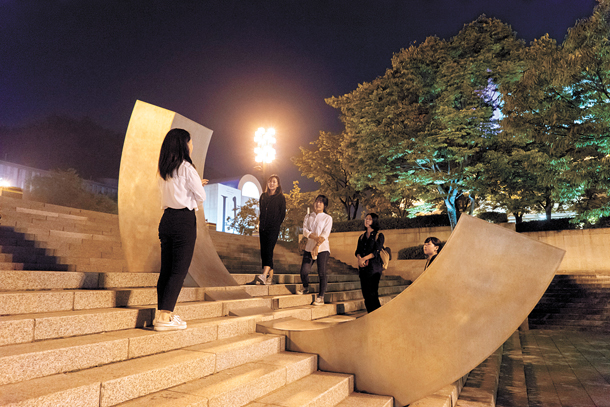 Team Honeybee, one of 10 teams composed of an art curator and Seoul citizens, view public art at Seoul Arts Center. The "Arts on Seoul's street found by citizens," is a project launched by the city government in August to help citizens uncover public art. About 100 Seoul residents, from their early 20s to 70s, are participating in this project that ends next month with an exhibition at the Dongdaemun Design Plaza. [SEOUL METROPOLITAN GOVERNMENT]

There’s a gigantic bronze sculpture of crossed wrists - the hand gesture of the horse dance in Psy’s megahit “Gangnam Style” - near the eastern square of COEX in Gangnam District, southern Seoul.

Gangnam District Office reportedly spent 118 million won ($104,000) to erect this jarring sculpture that’s 5 meters (16.4 feet) tall and 8 meters wide. The sculpture plays the song “Gangnam Style,” when a person stands underneath. To make sure no one misses it at night, LED lights have been installed to bring the spotlight back onto the hands.

The public sculpture was erected in April to help Seoul have its own “storytelling sculpture” that can “become a talk of the globe” while serving as a city landmark and a popular tourist destination, according to the district office.

“Like there’s the famous Charging Bull sculpture by Wall Street in New York, or the Cloud Gate in Chicago, we believed it is necessary to have such a landmark that has a story to tell,” an official from the district office explained.

It certainly became the talk of the town.

Koreans criticized it as an ugly overpriced sculpture.

Since the “Arts Decorations for Buildings” legislation took effect in 1995 that requires large buildings with a floor area of 3,000 square meters to spend 1 percent of their total construction costs on installing decorative public art, gigantic sculptures, especially tawdry bronze ones, have sprouted here and there across the country. The legislation was revised and was called the “Installation for Art Works” in November 2011. The law stipulates that a certain percentage of the construction or expansion costs for buildings with more than 10,000 square meters be donated to Arko, the Art Council Korea. Not only did the government make it a law for businesses to support art and culture, the government has launched numerous public art projects by spending billions of won in an effort to create jobs and opportunities for artists while reviving underdeveloped neighborhoods and public areas to attract tourism.

However, the public has been pointing fingers, for many years, at the works of art that make their brows furrow. The Gangnam Style sculpture is perhaps the most recent example. However, there are many popular public artworks that were favorable with the public, such as the giant rubber duck that floated on Seokchon Lake in 2014 and the LED Rose Garden in Dongdaemun Design Plaza (DDP).

How do the people really perceive such abundant public art work around Seoul? 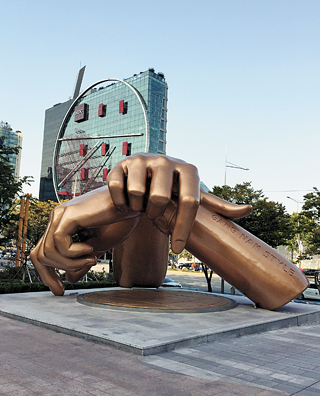 Many Koreans have criticized the bronze sculpture "Gangnam Style" in the eastern square of COEX, southern Seoul. [MOON SO-YOUNG]

In attempts to find that out while allowing the public to learn more about public art and freely discuss what they like and dislike, the Seoul City Government launched the “Arts on Seoul’s street found by citizens” project in late August. Ten groups have been formed and each team is composed of about 10 citizens who have signed up to participate and one professional art curator.

“When I first saw the gigantic Gangnam Style sculpture in front of COEX, I was just dumbfounded, first by its size, then by its color,” said Cho Geum-joo, a participant of one group named “3O” during the group’s discussion last month after looking around their neighborhoods to discover public artwork.

“Since I personally felt it was big and ugly, and even creepy as it looks like the wrists have been cut, I wanted to find out if others think similarly,” she added. So Cho sat down in front of the sculpture for more than an hour to interview the passersby.

“Most Koreans told me they were shocked to see the real size and they simply answered they like it without giving much thought. Foreigners, on the other hand, ran toward it while screaming ‘Gangnam Style.’ They galloped in front of it laughing and took endless photographs,” Cho said. “At first, I thought they really liked it, but the longer I lingered around, I kinda felt that tourists simply like the song and that they take pictures not because they find it artistically pleasing or because it harmonizes with the surroundings, but because it’s just so big and peculiar.”

After the discussion, the group headed toward the DDP, which is full of public art. Currently, new statues that resemble a human body have been erected around the DDP. They are also giant and bronze. These statues, however, are not permanent, but are part of a temporary exhibition by artist Kim Young-won, who is known for designing the King Sejong statue in Gwanghwamun.

“I don’t know why Korean artists so love bronze statues,” said Cho. “But I think this bronze artwork actually goes well with the futuristic DDP building.”

Another group, which named themselves Honeybee, gathered one evening late last month near the Seoul Arts Center in southern Seoul.

Their mission was to discover hidden public artwork in their neighborhood and create a tourist route. Most of the members expressed frustration that many of the sculptures, especially the ones within apartment complexes are not being looked after properly.

“I walked around my neighborhood near Sincheon Station and there were many sculptures near Ricenz Apartment complex,” said Jo Eun-ji, a member of the group in her 20s. “Most of them were supposed to light up during the night but the LED lights did not come on. I guess, because it’s an obligation for the construction companies to install an artwork for the public, they install it, and never take care of it.”

“I don’t think we can define what is good public art and what’s not as many people have different opinions,” said Hong Seong-wook, another member of the group in his 40s. “I also went to the zoo in Seoul Grand Park in Gwacheon, Gyeonggi and there was this humongous tiger that’s said to be about 6 meters tall and 11 meters long. I hated the sculpture but I still took pictures to show my friends to mock. But some tourists told me they love it and kept on taking selfies in front of it.”

The 10 teams will release their findings and results in an archive format outside the DDP next month, the government said. 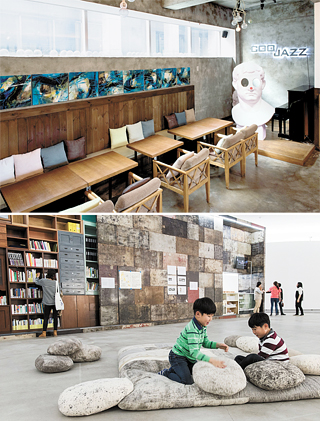 Top: Coo Coffee is one of 20 shops in Anyang at this year's Shop in the Art project. The coffee shop is displaying works by MEME Miu. Bottom: Children playing with designer Christina Kim's work "Rock Pillow Garden" inside the pavilion. Choi Jeong Hwa's "The Gateless Gate" is in the background. [APAP]

To help people really understand what public art is and who it is for, the Anyang City Government that holds the Anyang Public Art Project every three years decided to present this year’s festival without a theme.

“This year, we decided to focus on interacting with the public,” said Eungie Joo, art director of this year’s Anyang Public Art Project, the fifth edition of the festival that began in 2005. “We’ve worked together with artists to find out what the parameter of the public space is, what defines public art, how we can meet the public through artwork and make public art a part of the lives of the public.”

That’s why this year’s festival, titled APAP 5, introduced the Art in the Shop project at 20 shops like cafes and restaurants near the Anyang Art Park, the main venue of the festival.

“It is a collaborative work between 20 local artists and businesses along Anyang Art Park’s main thoroughfare,” said Joo.

In consultation with the owners of these small businesses, each artist created a piece of art for either a corner of a cafe or for the walls of the restaurants.

“Personally, because this is a restaurant, public art should be something that can simply be enjoyed by those who come to eat at my restaurant,” he said. “People take a look at the photographs that look like they belong to an art gallery and say they really like it. It naturally allows us to talk about APAP that’s going on throughout the neighborhood.”

There are also numerous workshops that are held with the artists and the public, such as the one by fashion designer Christina Kim. She designed cushions to lay out inside the APAP pavilion so that visitors can sit and relax. But to “work together with the citizens and allow them to be more involved in this public art project,” she organized a workshop so that they can hand stitch the cushions together.

“This project is also significant because Christina Kim uses organic cotton and naturally dyed fabrics to create these cushions and pillows that look like pebbles in the stream near here,” said docent Baek Sun-ji. The large cushion is made of remnants from smaller pillows and cushions, she explained.

Kim also designed a uniform for the 12 docents, who are also residents of Anyang.

“I was just interested in art and culture and in 2013, I heard about this project and signed up,” said Baek. She went through two tests before landing the position.

“We have a lot to memorize and study but it’s really enjoyable,” said Baek. “Through this year’s festival, however, I really understood why public art is called public art.”

Thanks to the APAP, there are about 140 public art pieces across Anyang that the public can permanently enjoy, such as the Anyang Pavilion designed by world renowned Portuguese architect Alvaro Siza Vieira, which was constructed in the inaugural year.

“Recently, there’s been a lot of controversy surrounding public artwork. But in fact, in the history of art, such controversies have existed across the globe for more than half a century. Especially in the last 20 years, there has been talk about what defines public art and what roles it should serve,” said Joo. Therefore, for APAP 5, “We hope to build on the rich history of public art in Anyang by introducing works that consider how art co-exists with nature, communicates with the local citizenry and can help us imagine our role in society.”