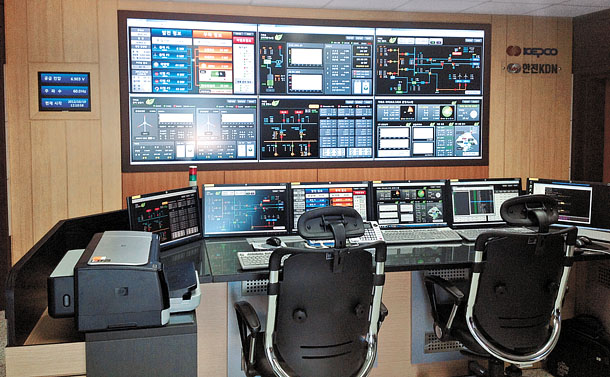 A micro-grid operations room at the Gapa Island Power Plant near the southern island of Jeju. [KEPCO]

The nation’s sole energy provider will focus on areas in the country that contain national parks, major tourist attractions and neighborhoods with narrow roads where above-ground power lines could be hazardous.

“There is a lot of demand for high-quality electricity service, but there have been lots of limitations for doing underground work since they cost more,” said Kim Chang-wan, a manager at Kepco. “However, we are now trying to install lines underground to improve the city’s appearance and resolve safety issues resulting from natural disasters and accidents.”

In addition to moving power lines underground, Kepco is embarking on a massive smart-grid project. In July, the company celebrated the start of its “smart-grid proliferation project” in Seoul. By utilizing the results of the company’s smart-grid test site on the southern island of Jeju, Kepco hopes to implement the technology throughout the country by 2018.

A smart grid is an electric power network that incorporates information and communications technology to maximize energy efficiency.

The power company said it hopes to reduce utility bills by encouraging people to use electricity efficiently, and to help central and regional governments reduce greenhouse gases and stimulate local economies.

Kepco established its test site on Jeju after signing a deal with the provincial government in 2011 to make the island carbon-free and then constructed a so-called micro-grid facility on Gapa Island near Jeju in 2013.

Micro grids, or highly localized electric grids, are used in remote areas like islands that have poor electricity infrastructure. The technology allows residents there to receive electricity generated through renewable sources like wind and solar. The grids require information technology to operate, an area where Korea is already very strong.

According to Kepco, the market size for micro grids is expected to grow rapidly, and the power company said it would expand their projects to 63 other islands and regions in the country with poor power infrastructure, such as Ulleung Island off the northeast coast.

Kepco is also proceeding with a 10 trillion won project with the central government to build close to 300 offshore wind turbines with a capacity of 2.5 gigawatts, enough to power 35,000 households, by 2020 in the southwestern coast of the country.