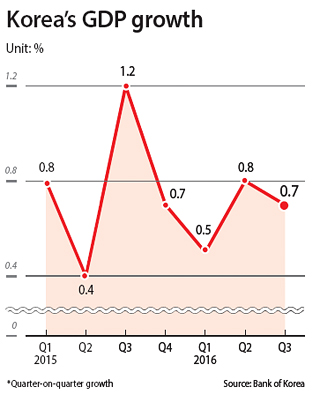 The country’s gross domestic product (GDP) expanded 0.7 percent between July and September compared to the second quarter, according to preliminary data released by the Bank of Korea on Tuesday. Real GDP increased 2.7 percent during the third quarter from a year earlier.

The modest improvement came largely from robust growth in construction investment, which rose 3.9 percent from the previous quarter. The central bank said both residential and commercial construction contributed to the increased expenditure.

The problems faced by the country’s two largest exporters, Samsung and Hyundai, were nonetheless salient, as manufacturing made up a declining share of GDP.

The share of manufacturing in GDP retreated 1 percentage point from the previous quarter, registering the lowest growth since 2009, when the country was reeling from the global financial crisis.

“Korea has posted less than 1 percent quarterly growth for four consecutive quarters,” Lee said. “This is because exports that used to drive the country’s growth remain weak.

“The current construction boom in parts of the country will likely come to an end as early as next year, which will drag down the economy unless exports recover.”

Driven by the real estate boom, output by construction businesses jumped 4.4 percent in the third quarter, but the good days are not likely to last for long.

In August, financial authorities vowed to restrict the supply of new residential homes provided by state-owned construction agencies and limited so-called group mortgage loans provided to groups of apartment buyers, arguing that the housing boom is leading to higher debt.

The weak exports and a tumultuous real estate market are signaling a tough 2017. The Bank of Korea shaved its growth forecast for next year to 2.8 percent, down from 2.9 percent, while holding this year’s forecast at 2.7 percent.

Private institutions paint an even bleaker picture. LG Economic Research Institute cut its 2017 outlook to 2.2 percent, and Hyundai Research Institute shaved its forecast down to 2.6 percent, saying 2017 will be the first year that the size of Korea’s primary workforce, aged 15 to 64, will start decreasing.