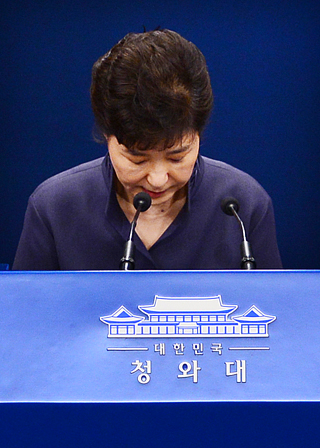 President Park Geun-hye bows on Tuesday in the Blue House press conference apologizing for seeking help from Choi Soon-sil, her longtime friend, for speeches before and after she became president. JTBC, the TV network of the JoongAng Media Group, reported starting last week that Choi, who holds no government position, was involved in editing Park’s speeches. [JOINT PRESS CORPS]

President Park Geun-hye Tuesday issued a swift apology over the involvement of her friend, Choi Soon-sil, in state affairs, following a series of media reports on Choi’s alleged control over the president.

In a hurriedly arranged press conference in the afternoon, Park issued a brief apology to the nation. JTBC, the TV network of the JoongAng Media Group, reported since last week that Choi received drafts of presidential speeches and sometimes edited them. The latest report, backed by files on a computer in Choi’s office, was aired Monday night.

Park admitted that she sought help from Choi for her speeches during her presidential campaign in 2012 and continued to do so after she took the office.

“As you all know, a candidate listens to opinions of various people during a campaign,” Park said. “Choi helped me when I was having a difficult time in the past, and based on that relationship, she played a role of giving her personal opinion on how my campaign, particularly speeches and promotional efforts, were being perceived by the public. I also sought her help to decide on expressions when creating some speeches and campaign materials.”

“After my presidential inauguration, I continued to listen to her opinions on some issues for some time,” Park said. “But I stopped after the Blue House’s advisory system was completed.

“I did so with an innocent intention to be meticulous, but I am truly sorry for troubling, shocking and hurting the people, no matter what my reason was,” she said. “I offer a deep apology.”

After reading the 90-second apology, a solemn Park ended the press conference without taking any question. The Blue House did not allow live airing of the apology. It was recorded and allowed to be broadcast later.

The revelation of Choi’s alleged control over the president engulfed the Blue House in a political firestorm Monday night and Tuesday but the presidential office remained totally silent until Park’s apology Tuesday afternoon.

Political parties, even her own Saenuri Party, demanded a personal explanation from her.

According to an exclusive report aired Monday night, JTBC obtained about 200 digital files from a computer in Choi’s office and 44 of them were Park’s speeches and official remarks. The files were saved and opened before Park actually delivered them -- in some case as early as three days in advance.

Choi, formerly described as a confidante to the president, seems to have exerted much more power over the president than ever conceived before - possible to an unprecedented extent. Choi is a daughter of Park’s former mentor, the late Choi Tae-min. Her ex-husband, Chung Yoon-hoi, was the chief of staff to Park from 1998 until 2004 when she was a lawmaker.

Over the past weeks, Choi has been at the center of a snowballing corruption scandal. She was accused of having used her ties to the president to strong-arm conglomerates into make donations worth 77.4 billion won ($68.2 million) to Park’s two pet projects - a cultural foundation and a sports foundation.

Critics have described the foundations as giant slush funds to finance Park’s life after the presidency, which the president has denied.

In addition, Choi allegedly embezzled money from them, which has prompted an official investigation by prosecutors, who are also probing how the foundations were started. The whereabouts of Choi are currently unclear. Prosecutors say that she left Korea for Germany.
The opposition parties said Park’s apology was totally insufficient.

“The president seems to have no understanding of what’s going on in this country,” said Chairwoman Choo Mi-ae of the main opposition Minjoo Party of Korea. “Chaos continued for more than a month and the constitutional order was violated, but the president simply expressed regret over a personal relationship. We don’t want to know what she feels personally. We want to hear from the president what will happen to the country, what will happen to the government and how she will restore the constitutional order. But she just issued an emotional, sentimental apology for a personal matter.”

Choo said the country is at risk. “Unless Park gets a grip on herself, the country may go into a war if Choi orders it to do so,” Choo said. She stressed that Choi had not only interfered in domestic politics but also in sensitive security issues concerning North Korea.

The latest JTBC report substantiates an earlier report from Oct. 19 that Choi had edited some of Park’s speeches. “What she loves the most is editing the [president’s] speeches,” Choi’s close associate Ko Young-tae told JTBC. “When the speech she edited creates a problem, she yells at the wrong people.”

The latest JTBC report, however, showed that Park’s landmark North Korea roadmap address delivered in Dresden, Germany, in 2014 was saved on Choi’s computer ahead of the actual speech. Park made breakthrough proposals in the address including joint economic development projects, the creation of a Northeast Asia Development Bank and cultural and educational exchanges with North Korea as steps toward a peaceful unification of the Korean Peninsula.

Opening remarks at major meetings hosted by Park, including a cabinet conference, were also shared with Choi. Park replaced her chief of staff Huh Tae-yeol and some other aides on Aug. 5, 2013. A file containing the president’s opening remark for the 34th cabinet meeting was delivered to Choi at 6:27 p.m. on Aug. 4, 2013, and the document included information about the reshuffle. The cabinet meeting actually took place on Aug. 6, 2013.

Earlier in the morning, the ruling Saenuri Party demanded Park address the scandal personally. “As a leader of the ruling party, I sincerely apologize to the people for this scandal,” Rep. Chung Jin-suk, Saenuri floor leader, said Tuesday. “President Park must directly explain to the people.”

“The prosecution and law enforcement authorities must locate Choi and her family and thoroughly investigate the scandal,” he said. “Senior Presidential Civil Affairs Secretary Woo Byung-woo must resign immediately. He is responsible for having failed to prevent Choi’s meticulously planned, immoral power abuse and amassing of wealth. He is also responsible for protecting the security of the Blue House and disciplining presidential aides.”

Some lawmakers of the Saenuri Party including Reps. Kim Yong-tae and Ha Tae-keung said an independent counsel must be appointed to investigate the Choi scandal in order to secure the integrity of the probe.

The main opposition Minjoo Party of Korea said Park must be investigated.

Woo said Park must personally explain to the people why the speeches were sent to Choi and why Choi edited them. “She must apologize to the people,” he said.

A person who conceals or divulges presidential records without permission is liable to up to seven-year imprisonment or up to 20 million won in fines, Article 30 of the act said.

Rep. Park Jie-won, acting head of the People’s Party, said state affairs were abused. “We need the president’s confession more than at any time in the past,” he said. “We demand it.”

Park’s relationship with the Choi family dates back to 1974. Choi Tae-min, a pastor of a minor religious group, wrote to Park asking for a meeting after her mother Yuk Young-soo was assassinated on Aug. 15, 1974. Reportedly, Choi said in the letter that he had met the late Yuk in a dream.

Choi subsequently became a mentor to Park, which he remained until his death in 1994. Reportedly, Korea’s intelligence agency described him as a pseudo-religious leader who claimed to have invented a cult by combining elements of Buddhism, Catholicism and Christianity.

Rumors that Choi Soon-sil and her ex-husband Chung have heavy influence over the president existed for years. In December 2014, Park Gwan-cheon, a senior police officer seconded to the Office of the Presidential Secretary for Civil Service Discipline, was questioned by the prosecution for having leaked a Blue House internal report that claimed that Chung had led a secret 10-member faction consisting of the president’s key secretaries in a bid to influence state affairs.

During the questioning, he said “Choi is ranked on the top of the power list. Chung is second. President Park is only the third.”