Dinos mount plate to face off against Bears

Dinos mount plate to face off against Bears

NC Dinos players and coaching staff celebrate their series win on Tuesday after taking down the LG Twins 8-3 in the fourth game of the series. The Dinos will meet the Doosan Bears in the coming Korean Series. [NEWSIS]

The NC Dinos have advanced to their first Korean Series with an 8-3 win over the LG Twins on Tuesday. The Dinos will now be facing the pennant winners and defending champs, the Doosan Bears.

During the game on Tuesday, it was proven once again that Park Sok-min’s shoulder is indeed worth every penny of the 9.6-billion-won ($8.45 million) deal he signed to don the Dinos uniform.

While the Dinos were trailing 0-1, Eric Thames, home run title winner from the regular season, came out to hit a homer and score the game-tying run in the fourth. Then Park came to the plate in the seventh, during which he cranked the go-ahead solo jack to put his team in the lead. With the game tied 1-1, Park went up against the Twins reliever, David Huff, and belted his second pitch over the left fence.

Just three days ago on Saturday, it was again Park’s bat that blasted the winning shot over the fence against Huff. It was a two-run homer back then, which ended the game’s deadlock and lifted the Dinos 2-0 over the Twins. Eventually, Park was picked as the MVP of the series, during which he went 2 for 9 with three runs and three runs batted in (RBI) as well as two home runs.

With Park dominating on plate, it was Eric Hacker, the starting pitcher of the day for the Dinos, who got things done on the mound. Hacker pitched for seven innings and limited the Twins’ offensive effort to just one run. Having rested only a few days since his last assignment on Friday, Hacker looked unstable at first, giving out two runs in a row at the bottom of the third. The bases were loaded by the end of the inning but the Dinos were able to limit the Twins’ run to one with a double play. Hacker was selected as the MVP of the match. The Dinos manager, Kim Kyung-moon, credited the American righty for handling himself well on the mound when the team was in a pinch.

“The Bears are good but baseball is an unpredictable game,” Park said. “If we enjoy this game and play, it shouldn’t be a problem for us to come out with good results. We have to let it go and relax.”

He added, “The way I played this season, I am not entirely satisfied. That’s what made me think that I need to show something. I still have the Korean Series to show what I am made of.” 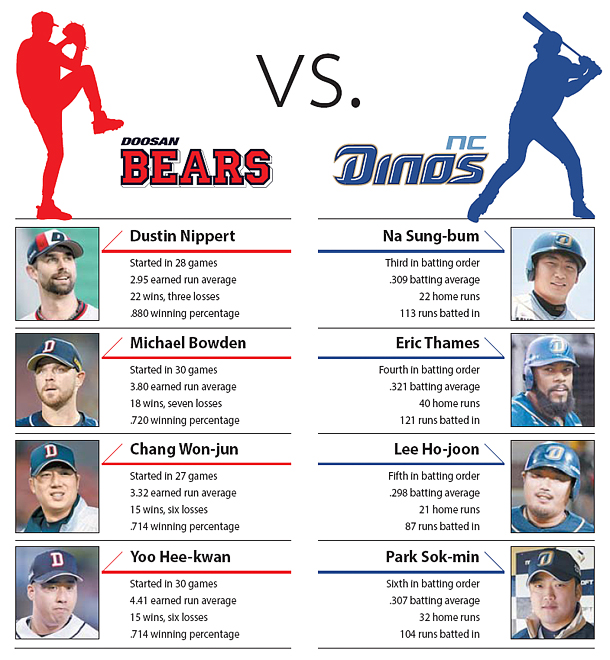 Kim, the skipper of the Dinos since their establishment, was of course as pleased as punch to see his team progress to the next round. A Korean Series berth has eluded the Dinos despite the team making it into the postseason in 2014 and 2015. They were eliminated in the second round in 2014 by the Twins, and in 2015, it was the Bears that obstructed the Dinos from going past the third round. Now in their fourth year of existence in the top league of the Korea Baseball Organization, the Dinos finally have a shot at taking the championship title, although the Bears will not give it to them easily.

“We finally took down the Twins [who defeated the Dinos in 2014 in the second round of postseason] this year,” said Kim. “We lost to the Bears last year, so hopefully, we can work together to overcome them this year.”

Kim himself has been to the championship final three times in the past but says reaching the final stage feels different this time around. “Advancing to the Korean Series with a new team is something else,” Kim explained. “We’ve had so many obstacles to come to where we are today, but that makes it even better.”

He added, “From now on, it’s all about the momentum. But right now, the players are worn out from the games [against the Twins] so rest and recuperation come first. But we will play this game well once the series starts.”

With their opponents finally decided, the Bears, who have earned the bye since taking the pennant this season, are ready for a showdown.

The Bears have spent some time in Japan in preparation for this year’s Korean Series and are in peak condition, according to the coaching staff.

Kim Tae-hyeong, the manager of the Bears, said after the game on Tuesday, “I have been preparing for the Korean Series with two different scenarios.”

He added, “Our preparation is complete. We played this game in our style during the regular season and will replicate that in the Korean Series. We will go for both the pennant and the Korean Series title this year.”

The Bears finished the regular season with 93 wins, 50 losses and one draw, the KBO’s single-season record for wins.

The main impetus behind their success is the impeccable pitching lineup with four of their starting pitchers raking in more than 15 wins throughout the season. The four pitchers - Dustin Nippert, Michael Bowden, Yoo Hee-kwan and Jang Won-jun - together tallied 70 wins.

But their supremacy on the mound will be challenged in the coming Korean Series as they prepare to go up against some of the best sluggers of the league - Na Sung-bum, Thames, Lee Ho-joon and Park - who together combined 115 home runs and 425 RBIs for the Dinos.

Against the Dinos, the Bears have the upperhand in terms of head-to-head records from the regular season with nine wins and seven losses.

The first game of this year’s Korean Series, which is played as a best-of-seven, is slated for this coming Saturday in Jamsil, the home of the Bears.