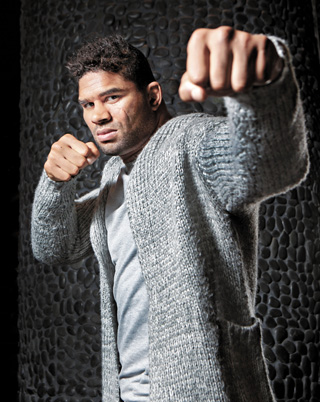 Despite the cold weather, many found their way to Deoksu Palace in Seoul this past Sunday morning to watch the Changing of the Guard ceremony, and those who braved the biting winds were in for a treat as Alistair Overeem, a heavyweight mixed martial arts (MMA) fighter, participated in the ceremony himself. When the Korean JoongAng Daily sat down with him after the ceremony, Overeem offered his own insight into how Korean fighters, or anyone dreaming of competing on a world-class stage, should approach the combat sport.

Overeem, a 36-year-old MMA fighter currently ranked third in the Ultimate Fighting Championship (UFC) official rankings, holds a 41-15-1 (win-loss-tie) record. Nicknamed “The Demolition Man,” he stands at six-foot-four and weighs 265 pounds, which makes him a domineering force in any bout.

The British-born Dutch fighter’s UFC debut was in December 2011 against Brock Lesnar, an American professional wrestler and former UFC heavyweight champion. Overeem won the fight with a technical knockout (TKO) in the first round. Although he was embroiled in a drug-abuse controversy, he renewed his contract with UFC earlier this year and fought in two bouts in May and September: against Andrei Arlovski, a Belarusian fighter, in May, Overeem claimed TKO by putting down his opponent with a front kick and strike to the jaw. The bout was named “Performance of the Night” by UFC. Against Stipe Miocic, an American fighter, Overeem was knocked out, although he came close to defeating the American by grappling. The fight was later picked as the “Fight of the Night.”

During the Changing of the Guard ceremony on Sunday, Overeem seemed immersed in the role he was given. When tourists approached him during a recess, the fighter remained solemn and stern. “It was a powerful costume,” Overeem later said. “[Other] guards were happy about the result. I love history and culture. I know some history about Korea but [the ceremony] was very interesting, being part of such rituals.”

Overeem, who has visited Korea in the past twice, says enthusiastic fans in Korea made a deep impression. “Fans love fighting [in Korea],” Overeem said. “They have a good understanding of the sport and they support the sport. There are also Korean fighters who hold potential to become UFC champions. If you don’t have your own fighters, it’s a problem. But you do. If UFC comes here, [it will receive] a lot of love. Korean fighters can compete with the best.”

The Dutch combatant also got to experience taekkyeon, a Korean traditional martial art characterized by its kicks, and the only martial art to make Unesco’s Intangible Cultural Heritage List. Overeem, who attended a taekkyeon class for a day at a local university, says experiencing the art stimulated his interest in the history of Korea further.

But for a decorated fighter such as Overeem, who is always on the lookout for ways to develop his competitive edge in the octagon, learning taekkyeon was more than just a cultural experience.

In fact, he says it gave him some inspiration on further evolving his tactics. “In fighting, the element of surprise lies in techniques that your opponents don’t know,” explained the fighter. “Finding new tactics is something always ongoing, and we are not just talking about new but also effective, as well. Any art that is new can be affective.”

He added, “You must always develop yourself. Every day you can train to get better.”

Although the depth of his fighting experience has deepened over the years, Overeem says he sticks to this basic principle.

When asked about Korea’s MMA scene, where many fighters start out in local taekwondo or judo gyms, without any training facilities designated for MMA per se, Overseem said, “[When I was young] Holland facilities were not good at all. But an ideal location for training does not exist. You must focus and train and that is all.” He also referred to a single match as “our bout,” rather than his own. When asked why he explained “MMA is a team sport and my coaches and sparring partner all fight with me.”

“Fortunately for a lot of people now, there is so much information available about this sport,” he added. “When I started to train, it was very hard. Not a lot of information. But again, the most important thing is you must always want to be a better fighter than you were yesterday.” 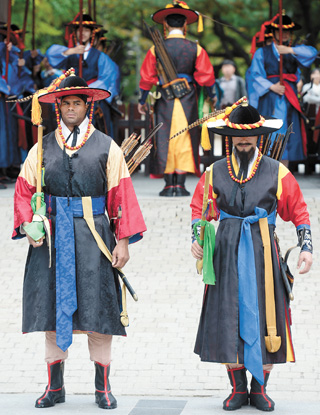 UFC Fighter Alistair Overeem, left, participates in the Changing of the Guard ceremony at Deoksu Palace on Sunday. [NEWSIS]

“Koreans may be smaller,” Overeem went on. “But fighters like Korean Zombie [the nickname of Jung Chan-sung, who was just relieved of his military duty earlier this month], Koreans are fearless warriors. You cannot underestimate Koreans.”

During the training session on Monday, Overeem did not hesitate to offer what he knows about the sport. “After 22 years of training and competing in the world,” he said to the fighters and coaching staff of Teammad. “I am happy to see you and learn from you guys.”

The language barrier did not hold back Korean fighters like Kim and Choi from taking advantage of the opportunity. Kim even approached Overeem for a light training session.

“Take good care of your body,” he advised his fellow fighters. “UFC is incredibly high level but I believe in power of yourself, keep going, this is my secret. I kept going and I got to where I wanted to be.”