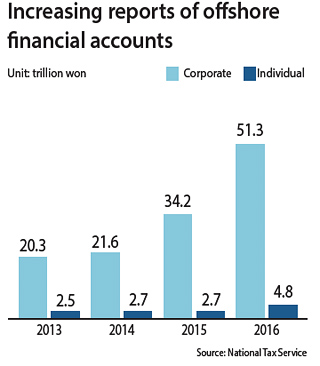 The government’s efforts to crack down on offshore tax dodging are paying off as the nation’s tax agency revealed Thursday that financial holdings reported from overseas this year surged 52 percent from last year.

Since 2011, the Korean government has required anyone with offshore holdings exceeding 1 billion won to report them to the National Tax Service. The voluntary report deadline each year is in June.

Most companies put their money into accounts in Hong Kong, where 16.6 trillion won is being held, followed by China with 6.2 trillion won. The United Arab Emirates, Japan and Australia round out the top five popular places for Korean companies to place their offshore holdings.

For individuals, Singapore was the most favored destination with 1.3 trillion won, followed by the United States with 1.2 trillion won.

Ever since President Park Geun-hye entered office in 2013, her administration has been cracking down on what it calls the “underground economy,” which includes offshore tax dodging.

In 2014, the government began requiring investments such as securities, derivatives and bonds be reported. Previously, only reports on bank accounts were mandatory.

This year, the government increased penalties for falsifying offshore holdings in an effort to encourage more people to voluntarily report accurate finances. Those who fail to fully report accurate holdings could face a maximum penalty tax of 40 percent.

And if the falsified offshore holdings exceed 5 billion won, the person could face a maximum two-year prison sentence, 20 percent more in penalties on the unreported amount and have their name disclosed to the public as a tax dodger.