Most days after work, Mr. Cho, a 30-year-old office worker, follows the same routine. He takes the subway home to his apartment, cracks open a beer and drinks by himself.

“Many of my neighborhood friends have moved on to other places for jobs and marriage,” he said, “even though I’m in the mood for a couple of drinks before heading home.”

For Koreans, drinking has traditionally been a social activity, but the recent preference for solitude represents a cultural shift driven by demographic trends as more people are living alone and spending time alone. 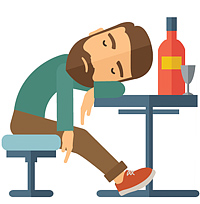 Nearly 40 percent of solo drinkers said they do so to control how much they drink and enjoy their alcohol quietly without others bothering them.

A large majority of solitary drinkers, 92.6 percent, said they drank at home, followed by 8.9 percent who said they drink outdoors in public places like parks and 8.4 percent answered bars.

“I often drink by myself at home when I feel like drinking to finish my day but am too tired to make appointments with friends or go out in general,” said a 29-year-old woman surnamed Chung.

Beer was the most popular type of alcoholic beverage consumed alone. The survey showed that 74.2 percent of solo drinkers preferred beer while 28.1 percent preferred soju. Multiple answers were allowed.

Most survey respondents said they expect the number of people drinking alone to go up as the trend is becoming more common and the number of single-person households continues to grow. The number of such households hit 5.2 million at the end of last year and accounted for 27.2 percent of the total population, according to Statistics Korea. That’s a rise of more than one million compared to 4.14 million in 2010.

Single-person households are now the most common type of household in Korea.