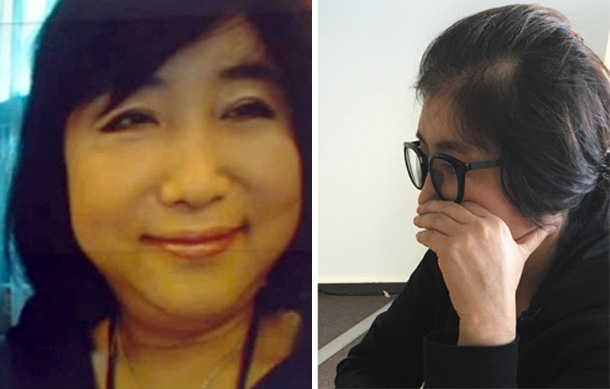 JTBC released a selfie of Choi Soon-sil, left, which was found on a tablet PC she denies owning, on Thursday. The Segye Ilbo released a photo of Choi being interviewed in Germany on Wednesday. [JTBC, SEGYE ILBO]

Denying allegations that she was the puppet-master of President Park Geun-hye, Choi Soon-sil, the president’s longtime friend, refused to return to Korea and cooperate with an investigation about the scandal threatening Park’s presidency.

The Segye Ilbo newspaper got an exclusive interview with Choi at a hotel in Germany on Wednesday and published it Thursday. Insisting on her innocence in regard to both corruption and power abuse allegations, Choi said her health has deteriorated and she cannot board a plane to return to Korea.

The Blue House was baffled by Choi’s refusal to return after President Park gave the greenlight to the prosecution to go after her confidante.
“The people have sustained a great shock,” presidential spokesman Jung Youn-kuk said. “She must come back as soon as possible and clear up the suspicions.”

Park and her administration are reeling from their biggest scandal after Choi was exposed as having far more influence than she should have - to the point of being a power behind the throne. Choi, who fled Korea for Germany on Sept 3, 2016, is a daughter of Park’s former mentor, the late Choi Tae-min.

While Choi admitted reviewing and edited the president’s speeches - perhaps the weakest of all the accusations against her - she denied that she had access to top-secret national security documents and influenced personnel appointments in the Park administration. She said she had received presidential documents at the early days of Park’s term via email.

“Because I was not a government official,” she told the Segye Ilbo, “I had no idea that they were confidential information.”

In the Segye Ilbo report, Choi mainly denied reports by JTBC, the TV network of the JoongAng Media Group, that she had received presidential documents using a tablet computer. The broadcaster said it obtained the computer by searching through things discarded from Choi’s office after she fled the country. About 200 digital files were found and analyzed, it said.

According to JTBC’s reports on Wednesday, the tablet computer was registered under the name of “Marey Company,” a corporation owned by Kim Han-su. Kim is currently working as a senior staffer for the new media secretary at the Blue House.

JTBC also said some of the documents discovered on the computer were created by Jeong Ho-seong, a personal secretary who has assisted the president for decades. For his allegiance and access to the president, he, along with aides Lee Jae-man and Ahn Bong-geun, have earned the nickname “door knobs” to the president.

In the interview, Choi said she had not met Jeong since he started working at the Blue House.

While Choi denied that the tablet computer is hers, evidence suggested otherwise. According to JBTC, selfies of Choi were found on the tablet.

Only a few telephone numbers including that of President Park were stored; the tablet computer’s ID was the same as Choi’s daughter’s former name, Yoo-yeon.

Choi also denied allegations that she had used her ties to the president to strong-arm conglomerates to make massive donations to two nonprofit foundations and then embezzled money from the foundations. The Mi-R and K-Sports foundations raised 77.4 billion won ($68.4 million) in total only days after their launches.

She denied a rumor that she created a secret inner circle to control state affairs, which was dubbed the Eight Fairies. “That is a fiction,” she said. “I have never created such a group.”

Park’s approval rating plummeted to the lowest ever. According to Realmeter, her approval rating was 17.5 percent on Wednesday, the first time it went below 20-percent mark. Park’s brief apology issued on Tuesday appeared to not help.

Asked how Park should take responsibility of the scandal, 42.3 percent of the respondents to said she should resign or be impeached. Another 21.5 percent said the Blue House and cabinet must be overhauled while 17.8 percent said Park must give up her Saenuri Party membership.

Park resumed pubic activities by attending a ceremony in Busan to mark Local Autonomy Day and delivering a speech. She made no mention of the scandal.

While the ruling and opposition parties pressed her to take follow-up measures such as replacing all members in her secretariat or cabinet and appoint a new prime minister based on a bipartisan recommendation, there was no indication Thursday of a reshuffle.

“Choi’s interview appeared to be an attempt to cover up the truth by coordinating her statements with Park’s apology,” Gyeonggi Governor Nam Kyung-pil, a Saenuri Party presidential contender, said.

The opposition Minjoo Party of Korea questioned the Park administration’s willingness to go after Choi. Minjoo Rep. Woo Sang-ho, the party’s floor leader, said it was suspicious that the National Intelligence Service and the prosecution have failed to locate Choi, while a newspaper could.

Rep. Park Wan-joo, deputy floor leader, said Park must declare publicly that she will submit to an investigation.