A path to constitutional change?

A path to constitutional change? 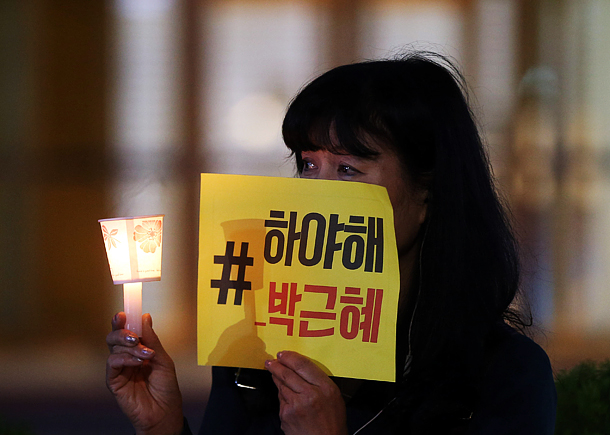 We thought President Park Geun-hye’s proposal for a constitutional amendment would be a black hole sucking up all issues, but it turned out to be far less powerful. The more destructive super typhoon is the allegations involving Choi Soon-sil, the president’s longtime friend. While the Korean economy is walking on thin ice, the current administration has lost all its power and energy. The apathetic nature of the public service will only become more serious.

The latest allegations remind me of the days when I was covering courts and prosecution offices in the early 2000s. Various scandals at the end of the Kim Dae-jung administration had so many people involved, and I was often confused. The Roh Moo-hyun and Lee Myung-bak administrations were not so different.

So we can conclude that the corruption scandals at the end of the administration are not simply inspired by greed and irregular practices of the power group. The system is flawed as it fails to catch signs of power abuse and corruption. This has to change, and that’s why we need constitutional revision.

The Korean economy has been struggling for several years now. The five-year single-term presidency limits the lifespan of government policies to three to four years. The “creative economy” that the Park administration has been promoting will meet a similar fate to the “green growth” of the Lee Myung-bak administration.

Some good policies need to be continued even if they are legacies of past administrations. But in Korea, when the administration changes, notable policies associated with the predecessors are abolished. Often, these policies are the center of president’s interest and large budgets are allocated. While it takes continued investment, they often get scrapped, and the budget is not used efficiently.

Nepotism and preferential treatment for friends and family continues. The process of seizing power is similar to a business. In order to win an election, a candidate has to bring people together, just like a businessman seeks investors. When he or she wins the election and takes power, it is a jackpot. In the new administration, contributors share the benefits. When this progresses to an extreme, unfit people are appointed to important positions and ruin the government. The way of sharing and distributing power and positions must change.

While people are interested in allegations involving Choi Soon-sil, politicians are beginning to consider a constitutional amendment. Former Minjoo Party advisor Sohn Hak-kyu said on October 27, “The crisis will end the Sixth Republic and make the Seventh Republic.” Is it plausible? I asked a friend who is a college professor, and he responded, “Who knows? The Sewol ferry tragedy served as a momentum to legislate the Kim Young-ran Act. The Choi Soon-sil scandal may propel the constitutional amendment.”

The corruption must be investigated thoroughly while we nurture the embers for constitutional amendment. The core of the revision must be the restructuring of power. Also, constitutional revision should be a beginning for structural reform to take the economy one step further.

Social consensus is a must for constitutional amendment. Based on the new constitution, various reforms needed for different areas of society should be legislated. Only then, the Korean economy would recover.