Korea Inc.’s expansion was tepid in 2015

Korea Inc.’s expansion was tepid in 2015 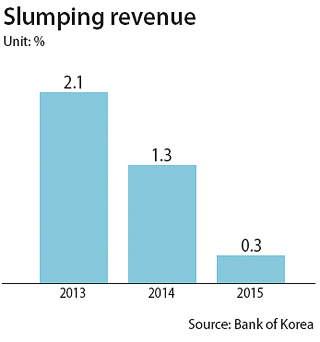 Korean companies were profitable last year but faced low revenue growth, a sign that local companies are struggling in efforts to expand.

A report released by the Bank of Korea Sunday tracked 574,851 companies of all types and sizes, excluding the finance sector, to measure different financial performances.

The central bank noted that the sharp fall in petrochemical companies’ sales decline contributed to the overall fall in the manufacturing field.

“Petrochemical and metal producers drove the decline in the manufacturing sector’s revenue growth,” the Bank of Korea said in a statement.

Petrochemical players pulled down the chart with a sales volume decrease of 15.2 percent last year as oil prices nosedived.

The sales decline among manufactures accelerated over time as the segment contracted 1.6 percent in 2014, followed by a 0.5 percent increase in 2013.

In terms of profitability, manufacturers did well: their operating profit-to-sales ratio jumped 5.1 percent from a year ago.

Total assets of the companies, including both manufacturers and non-manufacturers, also maintained robust growth.

“In the non-manufacturing circle, electricity producers and the real estate sector reduced their debt ratios.”