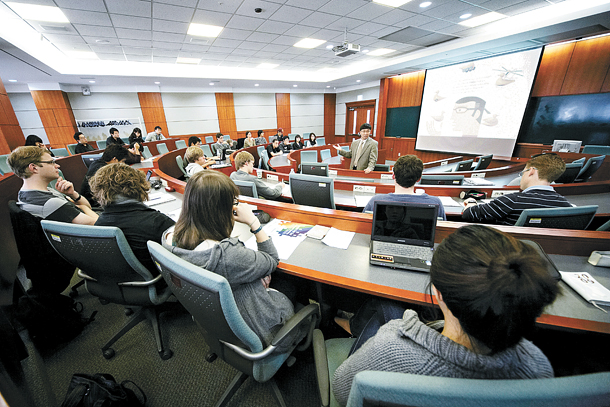 There was a time when having an MBA would guarantee a successful career, with a high salary and fast promotions. Short for master of business administration, an MBA is a practitioner’s degree given by a business school. They degrees were most popular in the 1980s and ’90s. But not anymore.

Recent studies show that a career for someone with an MBA isn’t much different than those without the degree. In fact, the two-year course has become nothing more than a means of self-development for the average worker, and major business schools all over the world are losing their competitive edge. The time and money needed doesn’t reap the harvest it used to.

The number of applicants for more than half of the 219 MBA programs in the United States declined recently, according to the Graduate Management Admission Council (GMAC). Also half of all U.S. business schools have plans to cut expenses in their MBA programs within the next year or two.

Prestigious business schools are no exception. According to the report released Oct. 15 by the Economist magazine, the number of applicants per opening decreased from 17 five years ago to 10 in 2016 for the top 15 full-time business programs in the United States, including the University of Chicago’s Booth School, Northwestern University’s Kellogg School of Business, the University of Virginia’s Darden, Harvard Business School and Stanford. The schools were assessed on various standards including their graduates’ income and the schools’ programs.

In the past, an MBA directly led to incomparably higher wages. Now, it’s hardly beneficial for many students. While the average tuition of the world’s top business schools was $112,000 based on rankings from the Economist magazine, the average salary of an MBA graduate earned turned out to be around $123,356, not exactly a great return on investment.

Korean MBAs are also facing similar problems, but worse. Within the 15 domestic MBAs, only four of the schools, Seoul National University, Korea University, Yonsei University and Hanyang University, managed to fill all of its slots. Only the top three universities, the so-called S.K.Y. universities (Seoul National, Korea University and Yonsei) managed to get more than the average number of applicants. According to the Ministry of Education, the ratio of applicants to positions available for MBA programs has fallen from 173:1 in 2013 to 164:1 last year.

Experts name the following as cause for the MBA’s downfall: favorable admission for those from certain undergraduate majors, the development of online MBAs and companies cutting a significant amount of tuition benefits.

The global economy, in the Korea and the United States, is still in bad shape, and companies are hiring less because of it. Amid the uphill battle to get a job, graduates who look to enhance their resumes are increasingly choosing degrees in specialized fields over MBAs. The trend is also influenced by companies that tend to prefer specialists in rising fields over generalists.

“These days, companies prefer someone with professional knowledge in finance, accounting, big data or programming,” said an official at a U.S. consulting company, who requested anonymity. “Hiring graduates with lower wages and then training them is much more profitable for the company than hiring an MBA holder at a higher cost.” 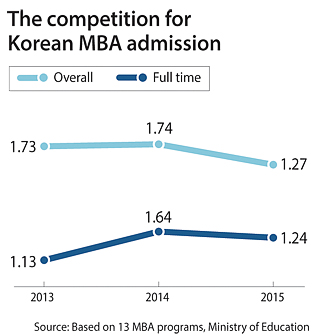 The development of online MBAs is also another factor. “People may think that the younger generation would prefer online MBAs, but it’s actually the seniors of the company that choose the online courses to juggle both work and study. Online MBAs are expected to rise by 9 percent by the next year,” said Sangeet Chowfla, president of GMAC.

The cost of the traditional MBAs is discouraging for many. Tuition at HEC Paris’s business school in France, is approximately 72 million won ($ conversion) for a 16-month course, whereas a one-year master’s degree program in global finance at the same school costs about 38 million won, almost half the price.

“Part-time MBAs have always been popular among workers despite the economic downturn but the applicant number has seen a sharp decrease this year,” said Gregg Shoenfeld, the director of management education research at GMAC, “owing much to companies having cut their budget on education funding.” The Executive MBA (EMBA) Council said that whereas 27.3 percent of those taking EMBA courses were funded by their employers in 2011, the number fell to 23.2 percent last year. Employees paying for their degrees rose from 36.9 percent to 41.2 percent.

“Funding certainly has been reducing,” said Micahel Desiderio, director of the Executive MBA Council. “The days of a big company saying, ’OK, we are going to fund five students every year for a set number of years’… those kind of days are pretty much over.”