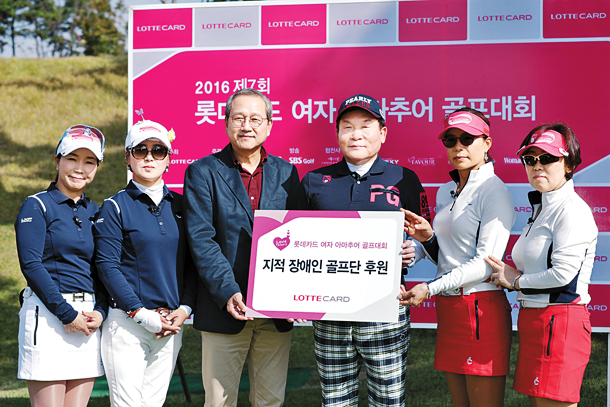 Lotte Card has been supporting golf teams made up of members with intellectual disabilities since 2011.

In 2012, the company constructed and donated a practice facility for the golf team of the Seoul Nambu Rehabilitation Center for the Handicapped. Golf equipment, as well as the opening of a screen golf competition for the disabled, was funded as well.

Also, on Oct. 17, Lotte Card donated 13.7 million won ($11,900) to SRC Tee UP, the golf team of Seoul Nambu Rehabilitation Center for the Handicapped.

The company also gives the opportunity for the youth of Eunpyeong Angels’ Haven to watch cultural performances by inviting them to the Big Pleasure Stage, which is held every month by Lotte Members.

To promote donations, Lotte Card has introduced a system which enables Lotte Card members to donate through their L.POINTs. Members can donate as many of their L.POINTs as they want to non-governmental organizations, and are able to donate regularly using the system.

Along with the system, Lotte Card holds a Point Matching Fund Campaign, where the company selects 2 issues in need of support and sets a goal for donations. After that, Lotte Card matches the collected total and contributes it to the fund.

Also, to create an atmosphere of sharing among Lotte staff and executives, Lotte Card holds a campaign to encourage their employees to donate a small portion of their monthly income to charity.

By adopting the Matching Grant donation system, in which Lotte Card matches the same amount of funds collected from the campaign, a total of 11.2 million won were accumulated for donation in 2015. The funds were donated to the Busan Center of the Korea Childhood Leukemia Foundation on Mar. 9, 2016.

The staffs and executives of Lotte Card participate in a variety of social contribution activities as well.

In January of this year, Lotte Card held the Lighting Children Campaign, where staff and executives of the company assembled 200 solar light lanterns to give to children in underdeveloped countries where electricity is scare.