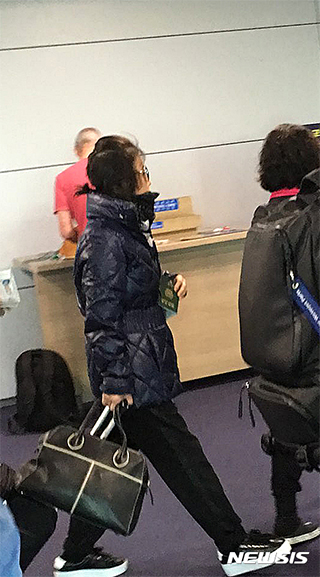 Choi Soon-sil is seen walking toward customs at Incheon International Airport Sunday morning after a flight from Heathrow Airport in London. [NEWSIS]

Choi Soon-sil, the friend of the president suspected of pulling strings from behind the scenes in state affairs as well as embezzling billions of won from two nonprofit foundations, arrived in Korea Sunday morning, her defense lawyer said.

“Choi is in contact with prosecutors through me to arrange a questioning schedule. I have requested prosecutors to give her a day or so to relax as she is fatigued from a long flight. Choi, as she expressed before through me, is willing to fully cooperate with the ongoing probe,” said Lee.

Chung Yoo-ra, Choi’s daughter, did not come with her, Lee said.

“She expresses deep sorrow to the public for the deep disappointment and frustration she has caused.”

The lawyer declined to clarify whether allegations raised by local media over the past week about Choi’s meddling in state affairs were true.

“It is inappropriate for me to comment on legal matters (at this point),” he said.

Choi’s arrival in Korea comes amid snowballing allegations about her interference in state affairs and embezzlement of money from the Mi-R and K-Sports foundations. Rocked by the Choi Scandal, President Park Geun-hye’s approval rating nosedived to 14 percent last week with growing demands from opposition parties for a complete cabinet reshuffle. The minor opposition Justice Party and many student groups are calling for her resignation.

President Park ordered all of her senior secretaries to tender their resignations Saturday.