Stielike marches ahead with troop of 25 men

Stielike marches ahead with troop of 25 men 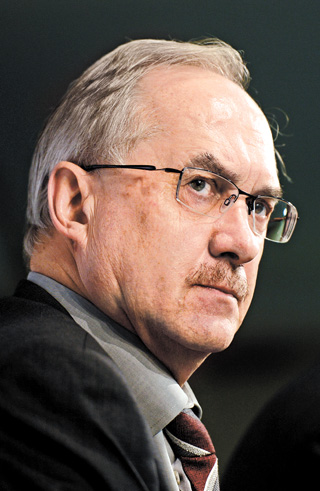 The Korean national football team announced its roster for the upcoming matches in November, during which Korea will play an international friendly against Canada and the fifth match of the final round of the Asian qualifiers for the 2018 World Cup against Uzbekistan. For the first time since Uli Stielike assumed the managerial post two years ago, the German-born manager has banded together 25 men on his roster.

In the regional qualifiers for the 2018 World Cup, Korea is ranked third in Group A after Iran and Uzbekistan with two wins, one draw and one loss. While the winner and runner-up of the group will automatically gain berth in the World Cup, the third-placed team will have to compete in a regional play-off round before competing for the World Cup spot with the team that places fourth in the Confederation of North, Central American and Caribbean Association Football (Concacaf) qualifiers.

This means the journey to Russia gets that much more complicated if Korea fails to finish first or second in the group. Korea is therefore in dire need of a victory this coming November against Uzbekistan, not just for the sake of qualifying for the World Cup, but also for the sake of the team’s morale. 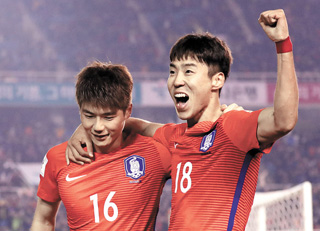 Lee Jeong-hyeop, right, celebrates after scoring the game winner against Lebanon in March during the second round of the World Cup qualifiers. [NEWSIS]

Unveiling the roster on Monday at the Korea Football Association headquarters in Seoul, Stielike said, “This is the first time we’ve convened 25 men. I will utilize this roster during the friendly against Canada and decide the final roster for the game against Uzbekistan.”

Against Canada, a friendly slated for Nov. 11 at Cheonan Stadium in Cheonan, South Chungcheong, Stielike will be able to exploit his 25-man roster. But for the qualifiers on Nov. 15 at Seoul World Cup Stadium, the skipper will have to reduce the roster to 23 men, as allowed by FIFA.

One of the notable changes to the roster unveiled on Monday was the number of full backs he called up. Hong Chul, Park Joo-ho and Yun Suk-young were brought up to fill in the left defensive back. For Park and Yun, this will be the first time they don the national team jersey since March.

Names to fill up the right side of the defense included Kim Chang-soo and Choi Chul-soon. While this is the first time for Choi to be summoned up by the skipper, Kim rejoins the team after being absent from it since March. Jang Hyun-soo, a center back who was mobilized as a right full back, is likely to return to his original assignment at the center.

“Choi is a tenacious player,” said Stielike. “I needed this type of player against Iran [to which Korea lost 1-0]. I will play them [Kim and Choi] as the right back and Jang will go back to the center.”

Another notable returnee was Lee Jeong-hyeop, a forward from Ulsan Hyundai FC who netted the game winner during the second round of Asian qualifiers for the 2018 World Cup against Lebanon in March.

Lee is back on the roster for the first time in seven months. Suk Hyun-jun, a striker from Turkish club Trabzonspor, however, did not make the team this time around.

“Offensively, I have Plan A and Plan B. Plan B is mobilizing Kim Shin-wook up front,” Stielike explained. “But Plan A is what I am trying to pursue and Lee is the man for the job.”

He added, “The fundamentals of my tactic is to maximize our possession, which means I need more movement up front. Strikers must be able to move in and out of available spaces to create scoring chances. Lee demonstrated such mobility in the past for Sangju Sangmu [the Korea Armed Forces Athletic Corps’ football team] as well as during the Asian Cup [in 2015]. He hasn’t scored much for Ulsan but I need his mobility for Plan A.”