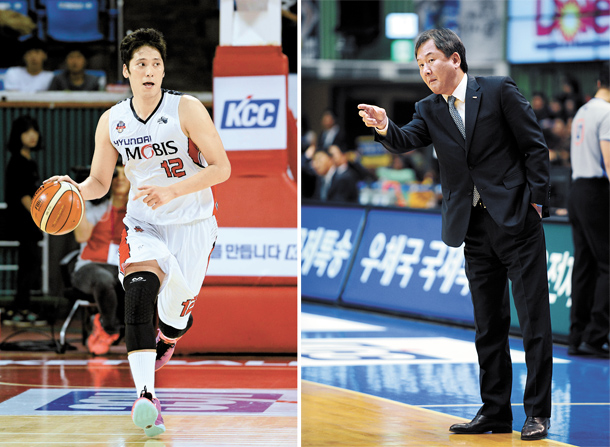 After being eliminated from the playoffs last season, Ulsan Mobis Phoebus embarked on the 2016-17 Korean Basketball League (KBL) on a high note as one of the favorites to take the championship title. However, Pheobus’ campaign hit a bump as soon as the season started, with their franchise star and point guard, Yang Dong-geun, suffering a devastating injury that has now put him on the sidelines. Since then, Yang’s vacancy proved to be irreparable as Phoebus fell into a four-game skid. While Yoo Jae-hak, the head coach of Phoebus, has yet to find either Yang’s replacement or the tactics to make do without him, Ham Ji-hoon, another franchise star and close friend of Yang, may be the key for Phoebus to stay competitive until the guard returns.

Yoo was all smiles at the opening of the match against Incheon ET Land Elephants on Oct. 22. After all, just a few days ago, super-rookie Lee Jong-hyun has donned the Phoebus uniform from this year’s rookie draft.

But when Yang fell in the third quarter, Yoo’s face turned suddenly pale. After the diagnosis, it was discovered that the guard had fractured his wrist. “There goes my game plan,” said Yoo.

With the injury, the point guard, arguably the most important element behind Yoo’s season plan, won’t be on the court until the fourth round of the season. “Basically, he’s out for the season,” said Yoo. Piling on the delayed debut of the super-rookie, who is still recuperating from a foot injury and will not be available until the mid-season, Phoebus’ chance for the playoff looks bleak now. “Frankly, I have no replacement for Yang,” said an exacerbated Yoo. “Our thin lineup is completely exposed.”

Since Yang joined in 2004 as a first-round pick, the Phoebus have not tasted much success in the rookie draft. Spending the 2005-06 season rebuilding after Yang joined, Phoebus would go on and take the championship title in the 2006-07 season, and thus began their heyday. Since then, they have taken four championship titles, including three consecutive ones from 2012-13 season to 2014-15 season.

As it turned out, the team’s prime coincided with the dark age of recruiting, as Phoebus was constantly given the last pick in the draft. Phoebus enjoyed a brief stint in 2012 with Kim Si-rae putting on the Phoebus uniform as the first pick, but he was traded to the Changwon LG Sakers after just one season.

Without any luck in the rookie draft, it was only a matter of time before Phoebus, which has failed to build up their roster, would be in a quandary. The time bomb that has been ticking for a while finally exploded with Yang’s injury.

Thankfully, Phoebus were not entirely out of luck, as they were able to reel in Ham during this period. Joining the team as 10th pick during the 2007 rookie draft, Ham quickly emerged as a key player to support Yang on the court. As an all-round player, the 1.98 meter (6 foot 5 inch) forward was the big man who Yoo could count on under the basket. Since he donned the Phoebus jersey, Ham has been raking in more than 10 points on average, except in the 2014-15 season, and more than five rebounds per game except in three seasons.

More notable than his ability to score and grab the ball off the rim, however, is his ability as a playmaker. Last year, Ham finished the regular season with 5.53 assists on average, second in the league after Yang. In the four games this season, Ham has been dishing out 6.50 assists on average, third in the league. This essentially means that although he might not be able to replace Yang completely, Ham could potentially play the role akin to point guard, finding the open teammates and distributing the balls for others to net. Ham also is leading the league in terms of blocks.

“I need to work on my shooting,” Ham said when the Korea JoongAng Daily sat down with him before the season. But right now, in the absence of their starting point guard, Phoebus look to be in dire need of a leader on the court more than the ability to drain shots.