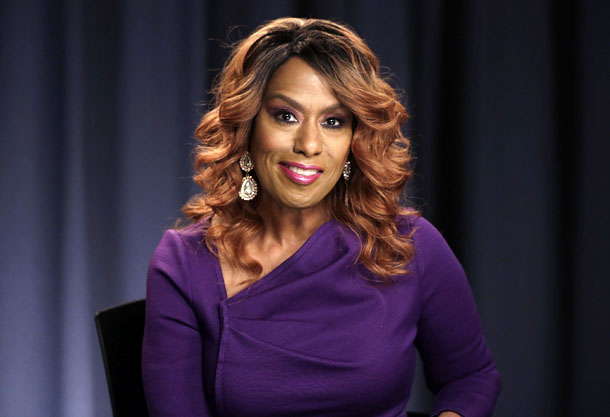 Actress and singer Jennifer Holliday, currently performing in the Broadway musical, “The Color Purple,” appears during an interview in New York. [AP/NEWSIS]

NEW YORK - At the Broadway musical “The Color Purple,” you can see a powerful tale of redemption and empowerment. That’s not just the show - it’s also the story of one of the actresses.

Jennifer Holliday has returned to Broadway for the first time in 15 years, and her appearance as the latest Shug Avery in the Tony-winning revival is something to cheer even before she sings a single note.

In the years since she won a Tony Award in “Dreamgirls” in 1982, Holliday has traveled a harder path than most, including enduring multiple sclerosis, gastric bypass surgery and clinical depression that led her to try to kill herself on her 30th birthday. It was enough to shake her faith in God.

“I was like, ‘Excuse me, uh, hello? This is a whole bunch you putting on a Dreamgirl. You know what I’m saying? There’s only so much a Dreamgirl can take,”’ she said recently.

“I said, ‘No, maybe he does love me. Maybe he believes so much that I need to be stronger - that I need to reach deeper inside, that I need to find the place of love that no one has dared to discover about me, even myself.”’

Today, Holliday, 56, is starting a new chapter in her life. She’s older than her co-stars but she can pull from a deeper well. She never gave up on herself.

“I didn’t really know that I would have a new lease on life. I would love to say I always believed but I didn’t,” she said. “I just kept saying, ‘If someone does rediscover me, I still want to have my voice. I still want to be ready.”’

Director John Doyle said he picked up some element of fragility when Holliday auditioned for “The Color Purple” and thought she would fit perfectly into the musical’s theme of surviving with grace.

“I was really impressed because she came into the room and she auditioned for the role. A lot of people think they’re beyond doing that and they’re too big for that. She wasn’t,” he said. “We need to celebrate our theater people. Not toss them aside and bring in a movie star.”

Discovered while singing in her church in Houston, Holliday made her Broadway debut in “Your Arms Too Short to Box with God,” then slipped into the career-defining role of Effie in “Dreamgirls” with its powerful song “And I Am Telling You I’m Not Going.” She was 21.

She turned that success into a recording career and appearances on “Ally McBeal” and “The Fresh Prince of Bel-Air,” but she also was depressed, struggled with her weight and then was diagnosed with multiple sclerosis, which led to temporary blindness and some paralysis.

“It was a very hard decision to let people know about the multiple sclerosis because we’re in an industry where illness is not something that show business likes. Rehab? Yes,” she said, ruefully.

When work dried up, she darkly considered that going behind bars might actually increase her job prospects since everyone likes a celebrity with a second act.

“If I could have gone to jail, I could be so rich by now. I was like, ‘What is the least crime that I could commit so that I could be on TMZ?’ I said, ‘It would just be my luck that whatever that is, they would change the sentencing and I’d be there forever.”’

Over the years, her “And I Am Telling You I’m Not Going” has become the equivalent of Barbra Streisand’s “People” - a song so associated with a single performer that it becomes the performer’s calling card.

“I know that I can’t leave a building - not even Target - without singing it. People have seen me at Target and say, ‘You’re Jennifer Holliday! “And I am telling you...!”’ I’m like, ‘OK, I’m trying to check out here. Trying to check out.”’

The song has aged as she has, getting richer and more meaningful. When she sang it first as a young woman, she really didn’t know love. She went on to marry twice and divorce twice. Then it became a fight song. And, in the face of medical challenges, it became the ultimate song for defying death.

The song also played a part in the rediscovery of Holliday. In 2012, she performed “And I Am Telling You I’m Not Going” alongside “American Idol” finalist Jessica Sanchez during the show’s finale . Soon invitations to perform were coming from Argentina and the Philippines.

And, now, back on Broadway, until the show closes on Jan. 8. Her advice to people facing challenges is that it gets better, even if the suffering and challenges take years. So, she says, keep singing, keep working, be ready when opportunity knocks.

“I always tell people, ‘It’ll get greater later,’ meaning that sometimes we have to pass through whatever it is,” she said. “We know that we can get through it because others have.” AP