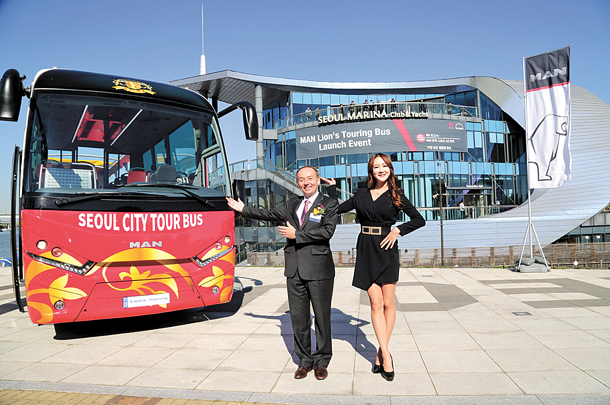 MAN Truck & Bus aims to ramp up its presence in the local bus market with a series of models scheduled for release, starting with an open-top city tour bus launched Tuesday at Seoul Marina.

Dubbed “MAN Lion’s Touring,” the tour bus is the German-based commercial vehicle provider’s first launch in the domestic market. It will travel to key tourist sites departing from Gwanghwamun in central Seoul.

The single-decker is divided in two, with a door in the middle. The back half, with 21 or 22 seats, has windows that can be removed and a reconfigurable top, for a more vivid view of the surrounding area. The front half, with 25 seats, is enclosed.

“Korea is the fourth biggest bus market in the world after China, India and Brazil,” said Max Burger, president of MAN Truck’s Korean operations at the launch in Yeouido, southwestern Seoul. “We had to find a way to adapt our product to Korean needs [and] this is our first step.”

The company has been discussing bus designs with Korea’s tourism and bus-related partners, including Honeymoon Travel, which operated Seoul’s city bus for more than 20 years.

European-style buses such as the bendy bus, where two vehicles are connected to make one, were introduced in Korea in 2004, but are now inefficient in Korea’s traffic conditions. MAN faced hurdles entering a domestic bus market with European-style commercial vehicles fit for Korea’s market conditions and regulations.

“We’ve conducted market research in recent years [and] we want to start with a product where there is no competition,” Burger said.

Two models are planned for launch next year: the compressed natural gas (CNG) low-floor bus and the double-decker city bus. The CNG bus will be introduced at the Seoul Motor Show in April, the company said.