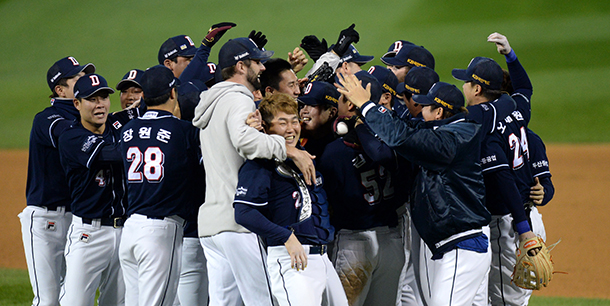 The Doosan Bears held onto the title at this year’s Korea Baseball Organization (KBO), edging out the NC Dinos 4-0 in the best-of-seven Korean Series.

On a chilly day at Masan Baseball Stadium in Changwon, the Bears took down the Dinos on Wednesday to claim the fourth game of the series and defend their 2015 title.

The pennant winners claimed their first run at the bottom of second inning. With one out on the scoreboard, the Bears catcher, Yang Eui-ji, came to the plate. Yang, the MVP of the second game of the series, belted the Dinos starting pitcher Zach Stuart’s slider over the left fence for a solo homer.

The second run also came off the tip of Yang’s bat. Nursing the 1-0 lead up to the sixth, Yang went up against Won Jong-hyun, who had just relieved Stuart, with runners on first and third bases, to crank an RBI double into right field. The Bears then quickly widened the gap to four runs, with third baseman Hur Kyougn-min jacking a double worth two runs batted in (RBI). Hur’s hit brought home Yang and designated hitter Nick Evans.

The Bears’ run reached its pinnacle at the top of the ninth when second baseman Oh Jae-won towered a homer worth three RBIs.

Extending the lead to 8-0 by the end of the inning, the Bears essentially secured their trophy by the time they were retired from the plate.

For the Dinos, who’ve been stuck in a rut, things did not improve. The team’s batting quartet of Na Sung-bum, Eric Thames, Lee Ho-joon and Park Sok-min were originally thought to be the needed weapon in the head-to-head against the Bears. The four, who together combined 115 home runs and 425 RBIs during the regular season, had gone 4-for-41 before the fourth game on Wednesday.

But they remained ice cold on the plate, with Lee not even making an appearance in the game until the final inning, and his brief stint as a pinch hitter came to a quick end and eventually concluded the Series while managing to score only two runs, a rather unenviable distinction as it’s the lowest any team has scored in the history of Korean Series. Park, the third baseman and highest paid free agent in the KBO, who batted .307 during the regular season while sending 32 balls over the fence and tallying 104 RBIs, went completely hitless during the Korean Series. Thames was the only one of the four to tally any hits on Wednesday, sending out a solo dinger that gave the Dinos their only run of the day.

With this victory, not only did the Bears clinch their second straight title, they also become the first team in 21 years to sweep both the pennant and the KBO trophy.