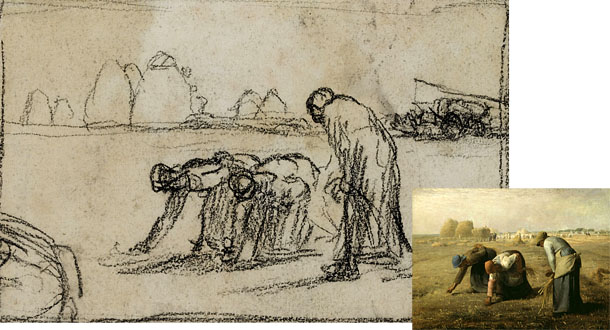 Right: “The Gleaners” by Jean-Francois Millet (small photo) is displayed at the exhibit with its drawing works (big photo). Bottom: “The Siesta” by Vincent Van Gogh is paying its first visit to a non-European nation in decades. [RMN-GRAND PALAIS/MUSEE D’ORSAY-GNC MEDIA, 2016]

From Vincent Van Gogh’s unique brushstrokes to Claude Monet’s feast of color, artists of the 19th century form one of the most loved and well-known streaks of art by the Korean public. Celebrating the 130th anniversary of Korea-France diplomatic relations and the 30th year since the opening of Musee d’Orsay in Paris, France, the Orsay is making a fifth visit to Korea, following its most recent in 2014.

Known as the archive of 19th century impressionist paintings, Musee d’Orsay keeps a wide range of world-famous art pieces, almost giving a feeling of stepping inside art history books as one strolls from one room to another.

Around 130 masterpieces of the era kept at the renowned art house arrived this year, with some of the pieces having taken decades to step outside the museum’s walls.

“This time, we brought many art pieces that have remained inside the museum for a long time,” said Guy Cogeval, president of Musee d’Orsay. “We would like to share the value of these works with Korean visitors.” 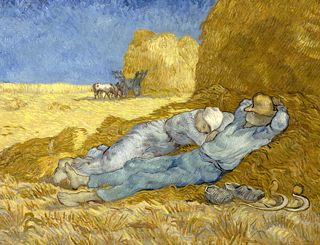 One of the key works in this year’s exhibition is the world-famous painting of “The Gleaners” by Jean-Francois Millet. A whole section of a room is dedicated to the renowned piece, but this isn’t all that adds to its specialty. This time, visitors may actually take a glance at how Millet achieved the artwork. As they walk into the room, they meet the masterpiece surrounded by Millet’s rough drawings of it, which worked as stepping-stones to the final work.

While it is uncommon for museums to put such delicate drawing works on permanent display, let alone in an overseas display, the exhibition aims at shedding light on not only the completed artwork, but also the process of creating it. This is also the Orsay’s first time holding an exhibition where they present both a masterpiece and its drawings together, displaying the relationship between the separate artworks.

“Holding an overseas display of drawings is very notable in that after this exhibition, no one will be able to lay eyes on these pieces for the next few years,” said Leila Jarbouai, drawings curator at the Orsay. “After displaying them, the drawing pieces undergo years of preservation in storage where all lights are blocked out.”

Along with Millet’s paintings and drawings, visitors may also take a look at the drawing works of Edgar Degas, who was deeply immersed in depicting feminine body movements made through the art of dancing. Although often quoted as one of the founders of impressionism, Degas was also a realist, which he preferred to be known as, who put a lot effort into depicting bodily curves and clothing textures as vividly as possible. A quiet walk through these drawings will guide visitors in following Degas’ efforts to his lively depictions of the dancers.

Other recognized pieces visiting Seoul include “The Siesta” by Vincent Van Gogh, which is paying its first visit to a non-European nation in decades, “Breton Peasant Women” by Paul Gauguin, and “Girls at the Piano” by Pierre Auguste Renoir.”