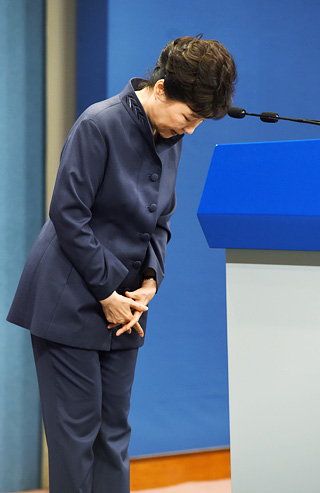 “We can’t trust women’s leadership,” some say. “There will never be a female president,” others quip. Lately, men openly make sarcastic remarks about women’s leadership. They say it like a joke, but they seem to mean it. Their comments are logically flawed, but I also understand their frustration so I refrain from arguing. Other female journalists say they feel embarrassed and discouraged by President Park Geun-hye and Choi Soon-sil’s abuse of power scandal, that Park and Choi have made women’s leadership an object of ridicule.

Since the last presidential election, I studied how female leaders succeeded and failed in history. One of the conclusions I reached was that female leaders should be wary of relying on confidantes. Crony politics existed under male leadership, as well, but crony politics under female leaders was especially corrupt and harmful. China’s first female ruler, Empress Lu Zhi, and only Empress regnant of China, Wu Zetian, were notable cases.

They stabilized the domestic economy and appropriately responded to foreign invasions, leading the country to prosperity. But along with Empress Dowager Cixi, they are considered the most evil women in Chinese history. Empress Lu Zhi’s husband, Emperor Gaozu of Han, claimed that only the family of Liu would become rule, but she changed that with a scheme and made her Lu family rulers. Empress Dowager Cixi killed her own son and had a relationship with two male prostitutes to produce an heir for the imperial family. She also allowed her lovers to intervene in politics, which led to a political rebellion. Personal relationships dominate public fields, and by mixing personal and public interests, political confusion resulted. She protected the cronies who behaved recklessly and insensibly and was cruel to her political enemies. In the end, her friends and family members were killed after she lost power or after her death. The vice of a female leader’s crony politics is still visible today. President Park proved that she was influenced by her friend. U.S. presidential candidate Hillary Clinton is being tested by the reinvestigation into her emails by the FBI. The center of the scandal is cronyism.

When Clinton was secretary of state, she allegedly communicated with her aides and friends using a personal email server and may have leaked confidential information. The capable and smart Hillary Clinton made the same mistake President Park made. In the 2008 presidential primary, Clinton lost to Obama because of nepotism and secrecy.

We often say female leadership is more democratic, interactive and relationship-based than autocratic and patriarchal male leadership, and it enhances efficiency by creating an organization culture of shared power and consideration. Another strength of female leadership is its emotional aspect. However, it is only a strength when the emotional element works properly. President Park’s emotion caused a lack of communication and a monopoly of power. Some female leaders are trapped in narrow-minded principles and arrogance. Just as in the Choi Soon-sil scandal, a female leader is often emotionally dependent and wants to communicate with her friends only. Then her friends behave arrogantly. With relationship-based closeness, the leader becomes a frog in a well, surrounded by a small inner circle. Emotional leadership without reason or logic can be very dangerous.

Lately, the crisis of female leadership has expanded to social chaos. The Park Geun-hye and Choi Soon-sil scandal revealed its darkest side. While we are in the worst situation, we should at least confront the weakness of female leadership. Those women who aspire to become leaders should be qualified to do so.

Without strenuous efforts to learn, train and improve herself to qualify for the job and gain recognition for a series of accomplishments, one woman’s princess-style ambition, which says, “I want to be the president because I am a daughter of a president,” has harmed the nation. Female leadership is not a virtue in and of itself. Whether female leadership benefits or harms the country depends on how well one leads, and nothing more or less than this.


*The author is an editorial writer at the JoongAng Ilbo.