‘This is the dirtiest campaign I’ve ever seen’

‘This is the dirtiest campaign I’ve ever seen’ 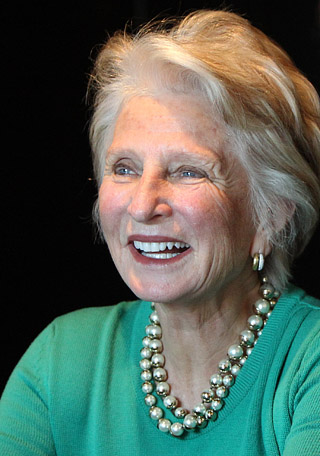 Jane Harman, president and CEO of the U.S. think tank Wilson Center, sits for an interview at Plaza Hotel in central Seoul on Tuesday. [CHO MUN-KYU]

Ahead of the upcoming U.S. presidential election, the head of the Washington-based think tank, The Wilson Center, pointed out that the current polarization in American politics, the worst she has ever seen, is hurting U.S. foreign policy. She said it is “the dirtiest and most debased” election she has seen in her lifetime.

Jane Harman, president and CEO of the Woodrow Wilson International Center for Scholars, sat for an interview with Kim Young-hie, senior columnist at the JoongAng Ilbo, on Tuesday at the Plaza Hotel in central Seoul, to discuss the U.S. presidential election next Tuesday as well as measures toward securing North Korea’s denuclearization.

An expert in security and public policy issues, Harman previously served as a U.S. House representative for California’s 36th congressional district. She is a graduate of Smith College and Harvard Law School and became the first female director, president and CEO of the Woodrow Wilson Center in 2011.

Harman, who has visited Seoul five times as president of the Wilson Center, also shared that she has a Korean daughter-in-law, adding, “So, I am in my view a Korean grandmother. Or as we say in Korean, I am sonnyeo babo (a fool for my granddaughter).”

Q. FBI director James B. Comey reopened Hillary Clinton’s “Emailgate.” May this new development impede the election of the first female president of the United States?

A. This action by Comey, which I find inexplicable … creates more dust. But I don’t know how much harm it will do to Hillary Clinton or how much help it will give to Donald Trump.

If elected, Hillary Clinton will be your first female president. What in your view will be the socio-cultural meaning of this?

While I was a member of Congress, in 2008, I was a delegate for Hillary Clinton. And I viewed her and her possible election as president as a historic event for America, which is way behind many other countries of the world, including the Republic of Korea. I remember in 1984, when Geraldine Ferraro, who was a close friend, was nominated as the first vice president on a major ticket, how excited I was. I think it is a major cultural event.

This election campaign is characterized as the dirtiest and most debased election in the history of America. How has it come to this?

Some people think the election of Abraham Lincoln might have been the all-time low. I don’t know, but in my lifetime, yes, it’s a fair comment: it’s the dirtiest and most debased. And the losers are the American people.

I attended two of the three presidential debates, because I am a member of the Presidential Debates Commission. I was in Las Vegas 10 days ago and that debate felt like a prize fight. The tension in the room was palpable and the tone of the debate was ugly. And unfortunately, our politics has now become a blame game and I think that it especially hurts America when it comes to foreign policy, where the old rule was, politics stop at the water’s edge.

Around 40 percent of Americans support Donald Trump. Doesn’t the explosive success of Trump represent the moral failure of Americans?

Well, I think 40 percent of Americans don’t support their current government. I think Donald Trump is more of a protest vote for some people. They are voting against the elite rather than for him.

If elected president, what should Clinton do to embrace those Americans who supported Trump or Sanders?

I think she should find the smartest people to think creatively about educating people for the new workforce and then figuring out the jobs that the new workforce will do. The obvious first step is rebuilding American’s infrastructure. Later today I will go to Incheon Airport. It’s beautiful. There is no airport in America that’s beautiful, not one, not anywhere, and we have a huge country. So rebuilding airports, roads, rails in America will take very sophisticated designs and advanced skills, in addition to a lot of workers … The other thing she has to focus on immediately is fixing the broken relationship between the president and the U.S. Congress.

The Economist predicts that Clinton, tied down and unpopular at home, could less easily meet challenges to American power from China and Russia, and that the United States’ role in the world would shrink. Do you agree with this analysis?

On the assumption that she wins, I think she is very capable and very well-qualified to deal with China and Russia. Will there be a major effort to drag her down? Probably. We have a toxic partisanship in Washington.

I saw her operate as a senator … I saw her reach for Republicans. I know she is highly regarded by some Republicans. When the election is over, if she builds bridges, I think she will get rewards that President Obama did not get, for two reasons. I think he started to work on this, but he then gave up. But two, he didn’t have the experience doing it that she has.

What, if any, would be the essential differences between President Barack Obama and Clinton in terms of policies and styles?

I think there will be some policy differences, especially in foreign policy. She has been called a hawk - I’m not sure that’s fair. But she is more willing to use or at least threaten to use America’s military capacity to create situations to help solve problems. That’s not her first instinct, but I think she has a more muscular view of foreign policy than President Obama does. I think she has been more focused for her lifetime on women and girls, and I think that will continue to be a focus for her, and I hope it will be a focus for her. She is enormously well-informed … very well-prepared and knows most of the worlds’ leaders and has relationships with them.

Will the United States’ stance toward Pyongyang under a Clinton administration get harder and tougher?

America’s policy is to support denuclearization. It’s not supporting a preemptive strike. There is conversation about that. There is conversation in Korea about that, too. Certainly my hope is that we will find a way to walk Kim Jong-un back, and I wrote an op-ed with James Person, who is a very able director of our Korean center at the Wilson Center, and has studied this very carefully. Our op-ed suggested that we try to find ways to achieve a freeze in North Korea, a serious freeze, after substantive and authentic talks, and then use that as a staging ground to build a relationship that would lead to denuclearization.

I hope it will be a very nuanced policy. We are working with China on climate change and that is a huge achievement of the Obama administration and of the Xi [Jinping] administration. Both of them were courageous to agree to goals. Climate change is an enormous threat to world security. So that’s a plus. The minus is the tension in the South China Sea and some other issues around intellectual property and cybersecurity, and those are minuses. But Hillary Clinton, in my view, gets this.

What legacy is President Obama leaving behind?

Well, he’s working on it. I think he’s picked some things he is very proud of. I think climate change is one; Cuba is two; the Iran deal is three. There’ll be a lot of unfinished business though.