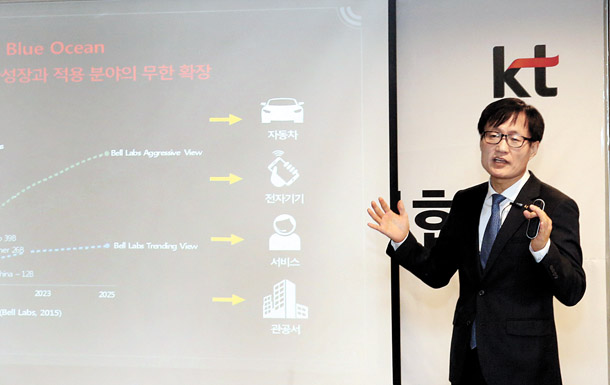 Korea’s second- and third-largest mobile carriers will collaborate to establish a low-power network nationwide that can allow users to connect their smartphones to various objects, from home appliances to even buildings.

The network forms the basic infrastructure for so-called Internet of Things (IoT) capability, which allows users to perform functions like turn on appliances, set room temperature and monitor pollution levels all from their smartphone.

KT and LG U+ plan to commercialize the technology for the network by March next year and complete installation nationwide by the end of next year. The network will utilize NarrowBand-Internet of Things (NB-IoT), a low-power radio technology developed by the 3rd Generation Partnership Project, comprising telecommunications associations from around the world.

The two Korean telecom operators will jointly purchase key components for the technology to lower cost. NB-IoT technology can run on the country’s exisiting LTE network.

With NB-IoT, a user can attach a small battery-powered sensor and transmitter to an object to facilitate communication with a smartphone. This makes it possible for users to control and monitor other devices from their phones. The sensor and transmitter, when attached to other objects, can also help track valuables, cargo, pets and even patients discharged from a hospital.

IoT networks generally require the support of billions of remote base stations and instant connectivity to quickly process the high volume of data coming from different objects. For any company interested in developing an IoT network, any cost-cutting methods cannot sacrifice network coverage and stable data transmission.

By collaborating on the commercialization of NB-IoT in Korea, KT and LG U+ said they aim to create their own IoT ecosystem to compete against industry rival and top player SK Telecom, which is developing its own IoT network.

KT and LG U+ hope to set NB-IoT as an international industry standard.

“Cooperating with LG U+ is meaningful in that telecom operators have thus far been concentrating on competition rather than working together to create a new market,” Kim Joon-keun, head of KT’s GiGA IoT business unit, said during a press conference Thursday at KT’s headquarters in Gwanghwamun, central Seoul.

SK Telecom has already established what it calls a “long-range network,” or LoRa, nationwide in June and announced last month that it aims to develop the network’s IoT capability. LoRa is another technology for IoT already adopted by some 400 telecom operators and tech companies worldwide since its launch last year.

KT and LG U+ claim their NB-IoT technology has a wider communication range of 15 kilometers (9.3 miles) over LoRa’s 11 kilometers and a higher transmission speed of 150 kilobytes per second, 15 times faster than LoRa’s.

Ahn Sung-joon, head of the IoT business unit at LG U+, said that while the implementation of LoRa has been led by European operators, NB-IoT will be led by Korean, Japanese and Chinese players.