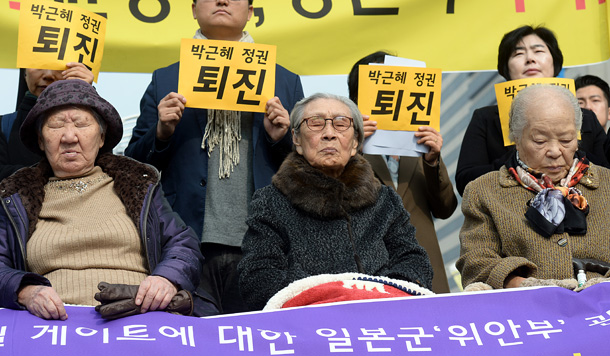 Victims of Japan’s wartime sexual slavery, Gil Won-ok, Kim Bok-dong, and Ahn Jeom-sun, make a declaration at a press conference Thursday demanding the president to step down over the Choi Soon-sil scandal at Gwanghwamun in central Seoul. [NEWSIS]

Victims of the Japanese military’s wartime sexual slavery made a public declaration on Thursday morning demanding for President Park Geun-hye to step down amid the scandal involving her friend, Choi Soon-sil.

The elderly survivors of the Imperial Japanese Army’s coercion of young women into sexual slavery, Kim Bok-dong, Gil Won-ok and Ahn Jeom-sun, as well as civic activists supporting these victims, who are euphemistically called comfort women, gathered in Gwanghwamun in central Seoul to issue their declaration.

“The 1965 Korea-Japan treaty under the Park Chung Hee administration, succeeded by the Park Geun-hye administration in 2015 through the comfort women agreement, are selling out our history,” they said in their statement. “As if that is not enough, there was another power in the background that has been meddling in state affairs like a person kneading dough, so we can no longer leave the government to a puppet administration.”

They went on to demand that the president, Foreign Minister Yun Byung-se and Gender Equality Minister Kang Eun-hee step down, as well as for the comfort women deal to be scrapped.

“It’s difficult to overlook reopening a Korea-Japan General Security of Military Information Agreement (GSOMIA) in the midst of the anger of the people,” they added, referring to Seoul’s decision to resume negotiations on a bilateral intelligence-sharing pact with Japan last week. “We can no longer leave President Park Geun-hye as the head of the country, holding authority as our top diplomat.”

Former President Park Chung-hee, father of the current president, signed a treaty to normalize relations between Seoul and Tokyo in 1965 following Japan’s colonial rule from 1910 to 1945. The treaty did not address the comfort women issue, which has hindered the two countries diplomatic ties since the 1990s.

Last Dec. 28, the two countries’ governments struck a “final and irreversible” agreement to resolve the issue, which included an apology from the Japanese prime minister and a 1 billion yen ($9.7 million) fund for the victims to be taken from Tokyo’s state budget. A foundation to oversee the fund was established in late July: and Japan transferred the fund at the end of August.

But this failed to satisfy some victims and civic organizations, including the Korean Council for the Women Drafted for Military Sexual Slavery by Japan, who from the beginning had demanded that Tokyo take clearer legal responsibility for its war crimes.

Kim said during the rally, “A responsible president of this country would clearly demand Japan make an apology and make reparations, but we just happily accepted the money, which means our president is selling away our history.”

The nation has been reeling from the revelation that the president’s longtime friend, Choi Soon-sil, who holds no government position, appears to have wielded vast influence over various parts of the government.

Choi allegedly had access to top-secret national security documents, influenced personnel appointments, strong-armed conglomerates into donating to foundations and apparently was involved in major decisions. There has been suspicion that Choi may have meddled in sensitive diplomatic affairs and possibly even had a say in the comfort women deal last year.

JTBC reported last week that Choi had access, nine hours in advance, to a nine-page document that instructed President Park how to respond to sensitive diplomatic topics during a meeting with three special envoys of Japanese Prime Minister Shinzo Abe in early 2013. This included notes on how to respond to the Dokdo and comfort women issues, if they were raised during the meeting.

Ewha Womans University on Oct. 26 was the first university to make a declaration demanding thorough investigations into Park and others involved in the allegations, and since then, some 100 universities nationwide and 1,500 civic organizations have joined in the protests.