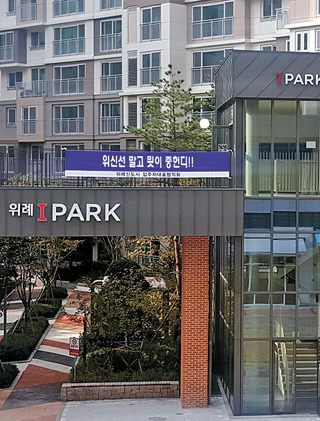 A banner demanding the light rail project be continued hangs outside an apartment in Wirye New Town on Monday. [JOONGANG ILBO]

Mr. Lee, a resident of Wirye New Town in the far reaches of southeastern Seoul, was frustrated when he heard that Samsung C&T was pulling out of a project to build a light rail line that connects the residential area to the commercial district of Sinsa-dong in Gangnam District, southern Seoul.

“We bought the apartment with the expectation that the light rail would open in early 2020,” the 38-year-old homeowner said. “Now we’re worried that our apartment value will fall because the project will be pushed back, on top of instability in the real estate market.”

Lee is among many residents worried about the light rail project delay. Some have even suggested group action to speed up construction of the rail. The pullout of Samsung C&T is affecting the value of apartments that once enjoyed a maximum selling price of 200 million won ($175,000).

Samsung C&T informed the Seoul city government of its decision on Oct. 28 and made it public on Monday.

“There was a risk not knowing how many people would be using the light rail,” a Samsung C&T official said. “We also have no experience in light rail construction, so we decided to fold the project.”

A consortium led by Samsung C&T that included GS E&C and Daewoo E&C won the rights to build a light rail for the Seoul government in 2008. The initial plan was to build a magnetic levitation, or maglev, train that would travel between Songpa District in southern Seoul and the central Yongsan District north of the Han River.

However, a project to develop Yongsan into an international business district was canceled, so the light rail project was downsized to its current form, with a line connecting areas in southeastern Seoul to commercial districts just south of the Han River.

The proposed light rail runs just over 9 miles and contains 11 stops in major southeastern Seoul neighborhoods, including Garak-dong, home to the Garak produce market, and Samseong-dong, where the exhibition center COEX is located. 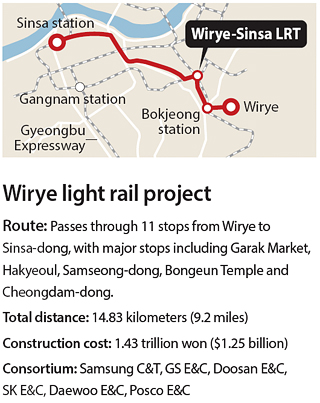 The Seoul government is looking into whether one of the companies in the consortium is interested in leading the project. The company will not only be responsible for construction but also have to seek investment and manage the project.

“Even if one of the companies in the consortium takes over, the project will be delayed for at least six months,” a construction company official said.

The project delay exacerbates already-terrible traffic conditions in Wirye New Town, where the only public transportation method available is bus. In order to commute from the neighborhood, residents either have to drive their own car or take the bus to the nearest subway station, Bokjeong Station on line No. 8.

The gridlock is expected to worsen as 20,000 more households are expected to move into the neighborhood. So far, only one more station, New Town Unam Station, also on line No. 8, is expected for completion by 2019 to accommodate the influx of residents.

Since Samsung C&T’s announcement, neighborhood real estate agencies have been getting calls from residents frustrated by the situation. They are wondering how long it will take before a new company to lead the project is selected and how much their apartment values have been falling.

Commercial businesses in Wrye New Town are most sensitive to the recent turn of events. “Stores near where the light rail station was to be located have seen premiums drop more than 50 million won,” a realtor said. “We can’t offer our customers promising commercial space with confidence.”

Experts say the unstable situation in Wirye New Town is only temporary and predict things will likely get back on track. “Because the light rail project has only been postponed, the market will be hesitant for a while, but things will change according to how the project moves along,” said Lim Chae-woo, a real estate specialist at KB Kookmin Bank.